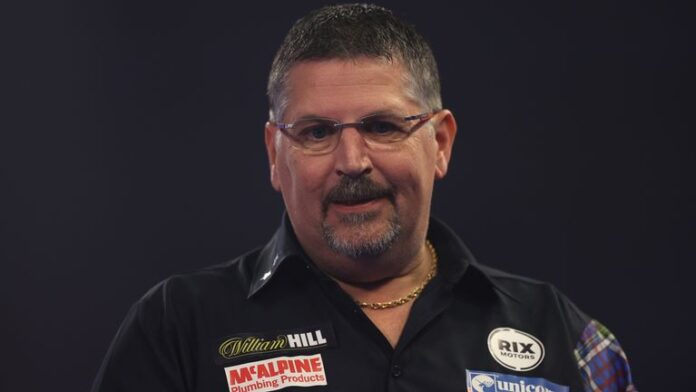 Gary Anderson stayed on course for his third World Championship title after coming through a tungsten tear-up with Mensur Suljovic at Alexandra Palace on Monday night.

Anderson won the final six legs to edge out Suljovic 4-3 in a match that was loaded with more drama and controversy than an episode of Coronation Street.

World Grand Prix champion Gerwyn Price was pushed all the way, but he hit a magical 170 finish and then kept his composure to see off a rejuvenated Brendan Dolan, while Premier League winner Glen Durrant defeated Danny Baggish.

Monday night at the Worlds

Anderson, the 2015 and 2016 champion showed plenty of grit to recover from 3-2 to defeat Suljovic and advance to the last 16 in the opening clash of the night, despite missing 33 darts at the double.

After the methodical Austrian won the opening leg in 20 darts, Anderson hit back with a classy 130 out-shot to restore parity. The opener was settled in a deciding leg. Anderson took out 73 on the bullseye after Suljovic squandered four at double for the set.

Suljovic, who was averaging below 80, fell 2-0 down in the second set. But he managed to win 25-dart third leg before hitting a superb 133 to level it up. Anderson had already missed eight set darts to win it 3-0, and after missing tops in the deciding leg, he was made to pay the ultimate price as Suljovic pinned D8.

The Flying Scotsman cut a frustrated figure with Suljovic adding to the tension on the stage with a touch of gamesmanship by slowing the pace of play. The Gentle missed four darts to win the set but Anderson made him pay with finishes of 102 and 69 to take a 2-1 advantage.

The darting drama continued in the fourth set with Suljovic whitewashing Anderson, wrapping it up with a tidy 81 in 11 darts as we hit the hour mark in the contest. The 20th seed made it six legs on the spin by sweeping through the fifth set for a 3-2 lead.

Anderson stopped the rot with a magnificent set of darts with checkouts of 106 and 156 either side of an 11-darter to send it into a deciding set.

With no tie-break, Suljovic had the throw but Anderson broke him in the opening leg thanks to D1 and then pinned D8 to move a leg away from victory. He went on to seal the win with D18, but it was Suljovic antics that riled Anderson in his post-match interview with Sky Sports.

Did you watch the last set? Or the third set? Was he slow then? No. I just want to play darts. I’m sure there are 90 per cent of folk watching at home, they probably turned over and watched Corrie or something – I would have done. I just want to throw darts and if you get spanked, the boy’s been better than you and beaten you. But that’s a load of tripe.

The Scot will now go on to face surprise-package Jason Lowe or 29th seed Devon Petersen for a place in the quarter-finals.

Price to face The King

Price overcame a battling performance from Dolan to set up an intriguing encounter against veteran Mervyn King.

Dolan wired two darts at D11 to win the opener in the deciding leg, allowing Price in for D12 to steal it and take the initiative with a 101.12 average. The Welshman gave a huge roar of relief to frustrate The History Maker.

The Northern Ireland ace replied with a whitewash set to level the match with a cool 102 average.

With Dolan sitting on 41 at the start of the fifth, Price netted The Big Fish just when he needed it. He quickly followed it up with a 74 checkout for a break of throw before sinking tops to move one set away from victory.

Dolan could not afford any slip-ups and showed immense composure to take out 88 on the bullseye. Price responded to finish off 74 to move within a leg of victory at 2-2 and after missing tops for a 145 checkout for the match, Dolan took out an unbelievable 104 under pressure to send the match into a deciding set.

The tension was palpable as a rip-roaring contest went down to the wire. Price moved within a leg of the match after a neat 14-darter, but Dolan took it all the way after nailing a Shanghai 120 finish. However, it was the Iceman who froze out Dolan, going out on 72 to win a thriller.

GUTTED to lose that.

I gave Gerwyn a game but the start in the last leg killed me. Good luck for the rest of the tournament Gezzy.

I knew the two darts at 11s in the first set could come back to haunt me and it eventually did.

Thanks to everyone for your support.

Tuesday at the World Championship

Three-time Lakeside champion Durrant produced a metronomic display of arrows in a 4-2 success over Baggish.

Baggish had learned the news his brother, Harrison, had suffered a severe stroke back home in Florida, following his first-round victory against Damon Heta. The American responded with a memorable and emotional victory against two-time former winner Adrian Lewis.

Duzza was in imperious form early on, though, as he secured the opening set 3-0 with a neat 94 average and 50 per cent on the double. Baggish then took out a 127 to force a second set decider, but it was the Middlesbrough thrower who held firm to double his lead.

The 12th seed took out 117 before moving one set away from a place in the next round by cleaning up 86 in 14 darts. Baggish responded by winning the fourth set with a 100.2 average before making it back-to-back sets to apply the pressure.

But Durrant set up a meeting with dazzling Dutchman Dirk van Duijvenbode in the next round after holding throw to win the deciding leg of the sixth set.

You won’t miss a dart thanks to the dedicated Sky Sports Darts channel all the way until January 4 with every session from the World Darts Championship, including the final on Sunday, January 3. Check out daily Darts news on skysports.com/darts, our app for mobile devices and our Twitter account @skysportsdarts