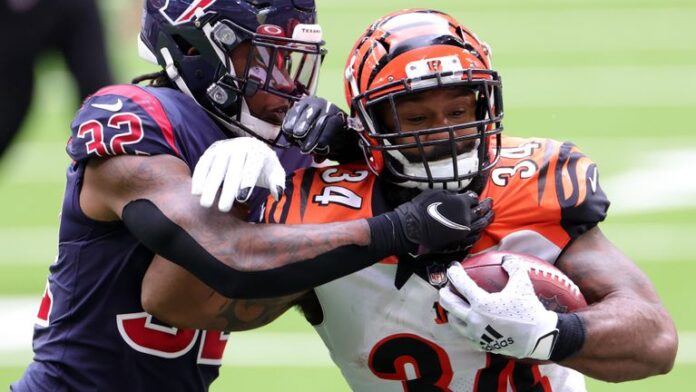 Drew Brees becomes the first quarterback in NFL history to throw for over 80,000 passing yards; Justin Herbert of the Los Angeles Chargers sets new record for the most touchdown passes thrown in a season by a rookie

The Christmas Day (Friday) fixture between the New Orleans Saints and Minnesota Vikings made this season the first to feature games on all seven days of the week. It also gave a couple of Christmas presents to the statistically-minded, with the 52-33 scoreline the first in NFL history, and Alvin Kamara became just the fourth player to score six touchdowns in the same game – Ernie Nevers the only other to rush for all six.

Players to score six touchdowns in a single game

With a nine-yard completion to Latavius Murray in the third quarter, Drew Brees became the first player in NFL history to throw for over 80,000 passing yards. Tom Brady is next on the list with 78,805 yards.

In the Tampa Bay Buccaneers’ 47-7 victory over the Detroit Lions, Brady had more yards and touchdown passes in the first quarter than the three Lions quarterbacks managed in the entire game (179-152 and 2-0). Brady also became the first quarterback in history to win at least 10 games with different teams in successive seasons.

Arizona Cardinals veteran receiver Larry Fitzgerald equalled the NFL record for the most seasons with at least 50 catches.

Most seasons with minimum 50 receptions

The Miami Dolphins offence scored points on all three of Ryan Fitzpatrick’s drives in the fourth quarter of their wild victory over the Las Vegas Raiders. The game saw five scoring plays that either tied the score or gave a team the lead in the final five minutes of play, culminating in Jason Sanders’ 44-yard field goal which ended the first 26-25 final score in NFL history.

The Baltimore Ravens defeated the Giants 27-13 and became just the second team in the past 30 years to have three players rush for at least 75 yards in the same game. Gus Edwards had 85 yards, Lamar Jackson 80 yards and J.K. Dobbins 77 yards. The only other team to do so previously was again Baltimore, in a 26-24 victory over the Cleveland Browns in 2018 in which Edwards and Jackson were joined by Kenneth Dixon in passing the 75-yard rushing mark. Jackson also became the first quarterback in NFL history to rush for at least 900 yards in successive seasons.

Travis Kelce set a new record for the most receiving yards in a season by a tight end in NFL history. The Kansas City Chiefs also recorded their 10th come-from-behind victory of the season and their seventh win in a row by six or fewer points in beating the Atlanta Falcons, setting a new NFL record.

Most receiving yards in a season by a tight end

Justin Herbert of the Los Angeles Chargers became just the fourth rookie to pass for more than 4,000 yards in a season and also set a new NFL record for the most touchdown passes in a season by a rookie.

Most touchdown passes in a season by a rookie QB

The Chicago Bears comfortably beat the Jacksonville Jaguars and have scored at least 30 points in four successive games for the first time since Weeks 4-7 of the 1965 season. At that time, their head coach was George Halas, their star running back was Gale Sayers and their star tight end was Mike Ditka – all three of whom are now in the NFL Hall of Fame.

The Philadelphia Eagles may have lost to the Dallas Cowboys on Sunday, but Jalen Hurts joined Michael Vick (2011) as the only quarterbacks in NFL history with at least 300 passing yards and at least 50 rushing yards in consecutive games.