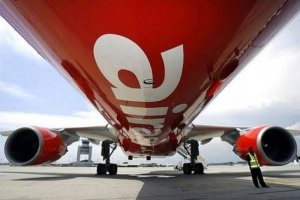 Tata Group has increased its stake in AirAsia India as the conglomerate looks to increase its share of the domestic aviation sector.

On Tuesday, the company announced it would increase its holdings in the Indian-based joint venture with AirAsia from 51 per cent to 84 per cent.

AirAsia, owned by Malaysian tycoon Tony Fernandes, has been scaling back its operations during the Covid-19 pandemic.

The government has been seeking a buyer for part of the loss-making flag-carrier for a number of years.

Tata Group is paying AirAsia around £30 million for the increased stake in the AirAsia India joint venture which began in 2014.

The deal puts the Indian conglomerate firmly in command of the budget carrier.

AirAsia has been looking to reduce its cash-burn and its Japan unit filed for bankruptcy last month.

The Tata Group – widely known as the Tatas in India – which also owns Jaguar Land Rover, originally founded the Air India airline in 1932 but sold its stake to the government in the 1950s.