Home Sport Fitzpatrick out of Dolphins’ playoff decider with COVID 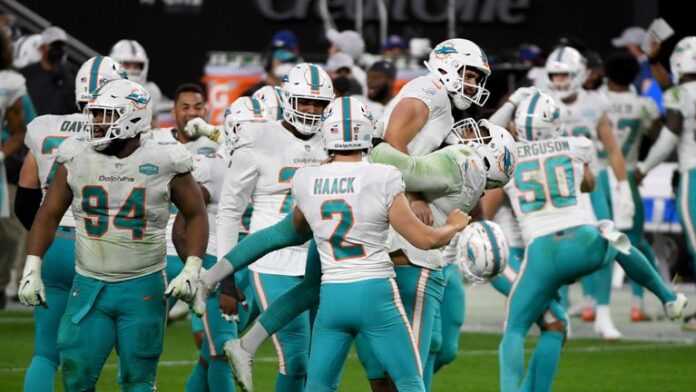 Ryan Fitzpatrick tested positive for COVID on Thursday, reported NFL Network; Tua Tagovailoa to start for Miami away to Buffalo in regular-season finale; Dolphins will reach playoffs with win over Bills

Fitzpatrick did not practice on Thursday for the Dolphins, who will have rookie Tua Tagovailoa under center three days later in their regular-season finale against the host Buffalo Bills.

Miami has yet to publicly comment on the reason for Fitzpatrick’s absence.

Fitzpatrick, 38, has completed 183 of 267 passes for 2,091 yards with 13 touchdowns and eight interceptions in nine games this season.

Tagovailoa, who was the fifth overall pick of the 2020 NFL Draft, has thrown for 1,453 yards with 10 touchdowns and two interceptions in nine games this season.

Fitzpatrick relieved Tagovailoa in a 26-25 last-second win over the host Las Vegas Raiders on December 26, making a key 41-yard pass while under pressure to set up the decisive field goal.

Quarterback Jake Rudock was signed on Thursday and he participated in practice ahead of his likely role as backup to Tagovailoa against Buffalo.

The Dolphins (10-5) will clinch a playoff berth if they beat the Bills (12-3) in Buffalo. A loss by the Cleveland Browns, Indianapolis Colts or Baltimore Ravens also would send Miami to the postseason for just the third time since 2001.