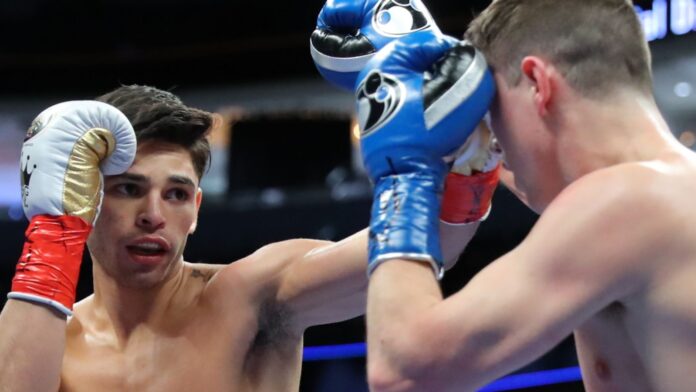 Luke Campbell knocked Ryan Garcia down in the second round but then succumbed to a brutal body shot in the seventh round; victory for US starlet Garcia justifies his status as one of American boxing’s hottest properties

Ryan Garcia recovered from an early knock-down to stop Luke Campbell in the seventh round with a vicious body shot.

Garcia found himself on the floor in the second round of his biggest test to date but battled back and scored a stunning finish with a left hook to the liver that sunk Campbell to a knee, and he could not get up.

The victory on Saturday in Texas for the talented 22-year-old justifies Garcia’s status as one of US boxing’s hottest properties.

By picking up the WBC interim title he becomes the mandatory challenger to fellow undefeated American Devin Haney (who holds the full title).

He is in the thick of an exciting lightweight division that also includes Teofimo Lopez (IBF, WBA and WBO champion) and Gervonta Davis (who also holds a version of the WBA belt).

For Britain’s Olympic gold medallist Campbell it is a sobering setback in his hunt for a world title – aged 33, he had previously been beaten twice in world title fights by Jorge Linares and Vasiliy Lomachenko.

‘King Ry’ was carried to the ring on a throne, much like Tyson Fury last February before his demolition of Deontay Wilder, but Garcia was brought back down to earth abruptly.

The feted American hit the deck for the first time in his 21-fght career in the second round when Campbell perfectly timed a looping left hand to knock him down.

Garcia’s reaction to the first major adversity he has ever experienced inside the ring was positive. He marched back onto the front foot and launched power punches while Campbell remained content to bide his time.

In a flash at the end of the fifth, Garcia exploded with a left hook that clearly hurt Campbell who briefly wilted towards the ropes until he was saved by the bell for the end of the round.

It was clear that Garcia’s power was troubling Campbell but the Brit also had his moments with slick counter-punches.

But the show was closed in the seventh with a brutal left hook by Garcia to Campbell’s ribs.

The Brit sunk to one knee, writhing in pain, and could not beat the referee’s count.

Garcia wildly celebrated extending his unbeaten record with pound-for-pound supremo Saul ‘Canelo’ Alvarez, who he trains alongside, and who climbed in the ring to congratulate him.