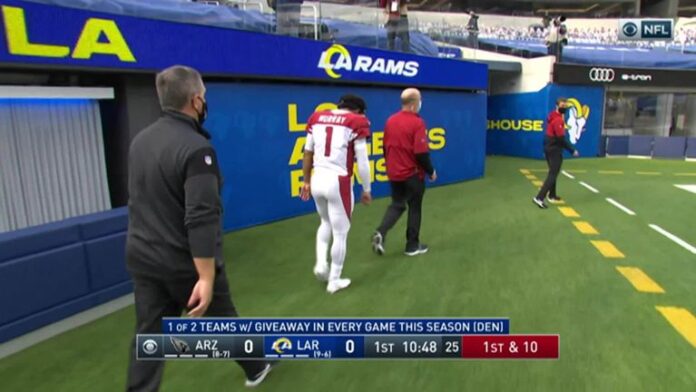 Los Angeles Rams were also without their regular starter at quarterback, Jared Goff, but backup John Wolford was impressive, passing for 231 yards and rushing for 56 on his NFL debut – and after throwing an interception with his very first throw

The Los Angeles Rams booked their place in the NFC playoffs at the expense of the Arizona Cardinals, who lost quarterback Kyler Murray to injury, with an 18-7 victory on Sunday.

Murray sat out for most of the first three quarters with an ankle injury aggravated on Arizona’s opening drive. He came back in the game with the Cardinals trailing in the fourth quarter but was severely limited as he passed for 87 yards.

The Rams were also without their regular starter at QB, Jared Goff, but backup John Wolford was impressive, throwing for 231 yards and rushing for 56 more on debut, bouncing back from being picked off with his very first throw in the NFL.

Despite failing to score an offensive touchdown for the second straight game, the Rams (10-6) still snapped a two-game losing streak to earn a their third postseason berth in four years under head coach Sean McVay.

Troy Hill returned an interception of Cardinals backup QB Chris Streveler 84 yards for a touchdown in yet another dominant defensive performance by Los Angeles.

The Rams defence put up nine points via Hill’s pick-six and a safety, while Matt Gay fired through a hat-trick of field goals which proved more than enough points against a toothless Arizona (8-8) attack on offence.

Jonathan Ward scored their only touchdown less than five minutes into the game – Arizona benefiting from the short field position off off the back of Wolford’s interception – but the Cardinals managed only 214 yards of total offence in the contest as a whole.

Wolford’s debut for the Rams started horrifically when he threw a terrible interception to linebacker Jordan Hicks on his first dropback deep in Rams territory. But he shook it off and led the Rams on three lengthy drives in the first half.

One of those resulted in Cam Akers fumbling at the one-yard line, but Los Angeles got a safety when Arizona left guard Justin Push held A’Shawn Robinson in the endzone moments later.

Hill put the Rams ahead by the half when he tipped Streveler’s underthrown pass to himself and raced downfield for his second pick-six against Arizona this season and third in six games.

Gay’s third field goal, in the fourth quarter, had the Rams up 18-7 and prompted the return of Murray. He immediately drove the Cardinals deep into Rams territory, but Robinson then blocked a field goal attempt with nine minutes to play to all but end the contest