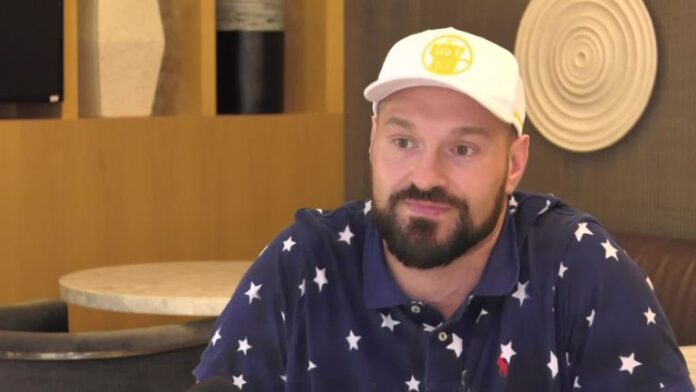 Tyson Fury on Anthony Joshua’s brutal pre-fight prediction: “It’s probably a lie, another lie. We’ll see if he’s got the guts to try and do it.” British heavyweight rivals are set to share the ring this year

Tyson Fury says Anthony Joshua’s chilling knockout threat is just “a lie” and believes his British rival is not confident about winning their world title fight.

WBC champion Fury is set to face Joshua, who holds the WBA, IBF and WBO titles, with talks ongoing to stage a massive showdown to decide the world’s No 1 heavyweight.

Joshua produced a dramatic knockout win over Kubrat Pulev in December and warned he wants to take Fury’s “head off his shoulders” when they finally share the ring.

But Fury told Fox Miami: “This fight has been brewing for a long time. They have been avoiding me for a long time and now it’s finally got to happen. They either run away from the fight and announce it publicly, or take the fight. Either way it’s a lose-lose situation for him.

“It’s a nice quote. It doesn’t mean anything. It’s sticks and stones. People say a lot of stuff and they don’t back it up, so we’ll see. I’ve never seen him take anybody’s head off anybody’s shoulders in all of his 22 fights. Probably a lie. Another lie.

Momentum is with me and I just believe I take him out early. Very early. Maybe even one round, two rounds.

“We’ll see if he’s got the guts to try and do it when I’m stood in the ring in front of him. I don’t believe he has.

“I don’t think he’s as good as people crack him up to be, or he doesn’t believe he is, in his own self. He’s got a confidence issue. He’s coming off two shaky performances. Boxing is all about who is in form and who isn’t. On his last two fights he’s not in form, on mine I am. Momentum is with me and I just believe I take him out early, very early. Maybe even one round, two rounds.”

Fury has questioned why Joshua was reluctant to call his name in the aftermath of the Pulev victory, a criticism which has since been clarified by the unified champion.

“He took it how he wanted to take it. I’ve never turned away from a fight. I’ve never announced a fight and not showed up. I’ve fought six to seven champions, in my short career. Tyson Fury is another one of them.

“There’s no reason as to why I see him any different to any other. If Tyson Fury is down, I’m ready, I’m keen. I’ve got four of the major belts, he’s got one. I’ll take that one from him.”

Fury defeated Deontay Wilder, another of the division’s destructive punchers, to claim the WBC belt in February and the 32-year-old insists his unique qualities will set him apart from any of his rivals.

“I just see myself as the regular average Joe. Don’t have the great body, don’t have anything brilliant about me,” said Fury.