Home Sport Team of the week: Wasps and Connacht dominate 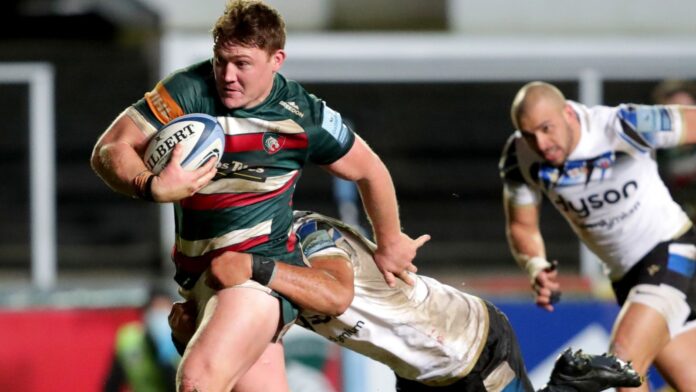 Connacht beat Leinster in Dublin for the first time since September 2002; Exeter Chiefs fell to their first defeat since October; three players from Bristol Bears feature, including 21-year-old hooker George Kloska, as well as Leicester Tiger’s No 8 Jasper Wiese

Wasps dominate our team of the week after they dismantled Exeter Chiefs, while Connacht and Bristol provide three players each…

It was a good weekend for full-backs, with Charles Piutau and Jacob Stockdale both important for their respective teams, but Lima Sopoaga gets the nod in the No 15 jersey this week in what was his 50th appearance for Wasps.

The All Black has not had it go all his way since arriving at the Ricoh Arena, but on Saturday he made a big impact with a try as well as threatening running throughout an encounter that ended in Exeter’s first loss since October.

George North helped Ospreys to a 17-3 victory over rivals Cardiff Blues, with the British and Irish Lions winger making three breaks and beating three defenders on his way to 81 metres made with ball in hand.

However, Paolo Odogwu made an even bigger impact against the defending Premiership champions; 88 metres with ball in hand as he and Sopoaga made a nuisance of themselves down the right touchline.

Ahead of Newcastle’s trip to Bristol on Friday night, there was a lot of expectation surrounding the midfield battle between Semi Radradra and George Wacokecoke.

Wacokecoke caused a stir in a losing cause at Ashton Gate, scoring a try for the Falcons, but it was Radradra who came out on top. The Bears centre made 60 metres with ball in hand – the most by a Bristol player by some margin – as well as making two defensive turnovers.

Stuart McCloskey was solid for Ulster, but Tom Daly was dominant in the Connacht midfield as they pulled off a shock 35-24 victory over Leinster.

Daly carried 13 times and made 12 tackles, and it was his intercept try with less than 10 minutes remaining that sealed Connacht’s first victory over Leinster in Dublin since 2002.

While teams like Wasps and Connacht blew the opposition away, Ulster were made to do it tough to beat a strong Munster side previously unbeaten.

Ethan McIlroy scored what ended up being the winning try as early as the first quarter of the game, but worked hard for the rest of the night, beating three defenders on his way to making 54 metres with ball in hand – the most of any of his team-mates on the day.

Jack Carty scored an incredible 25 points as Connacht turned over the defending PRO14 champions in impressive fashion at the RDS Arena.

The fly-half went over for two tries and slotted three conversions and three penalties to put his name firmly in the ring for Ireland contention in a post-Johnny Sexton era.

Cooney slotted two out of his three kicks at goal, but also marshalled the Ulster attack by switching up the tempo and keeping the Munster defenders guessing.

A nod to Ben Spencer, who scored an unbelievable solo try for Bath against Leicester at Welford Road, and controlled play well in a topsy-turvy game.

Ellis Genge was immense in the scrum as the Tigers saw off Bath in a 36-31 thriller at Welford Road.

Genge also popped up in the loose constantly, and he set up Tigers’ first try with a strong run; scattering a number of defenders before George Ford sent Freddie Steward over.

One of the most eye-catching performances across the sport over the weekend. The 21-year-old covered the most distance with ball in hand out of all the Bears forwards, and put in a mammoth 19 tackles as well as scoring a try.

There is plenty to be excited about when it comes to the future of the hooker born and bred in Bristol.

Kyle Sinckler did not have it all his way in the scrums on Friday night, but he stayed in the front row battle in the second half and by the end was firmly on top of his opposite number.

The prop forward came on as a replacement against the Falcons and made four carries as well as six tackles, but it was his dominance in the set-piece that will please Pat Lam and Eddie Jones in equal measure.

In order to beat the Champions Cup and Premiership title holders – and do so convincingly – it takes leadership up front, and Joe Launchbury provided that at the Ricoh Arena.

The second rower carried the ball 10 times, second behind only Jack Willis in a Wasps jersey, keeping the Chiefs defenders tied up around the ruck which helped to free up space out wide.

To give an indication of the defensive effort required to keep Leinster at bay, the top five tacklers at the RDS Arena were all Connacht players – and Quinn Roux’s 20 hits were the best of the lot.

The second rower also did his bit at lineout time, claiming two throws from team-mates and stealing one from the opposition.

James Gaskell scored two of his side’s five tries on Saturday, constantly popping up in support of the ball carrier to take a pass.

The loose forward carried six times and put in 11 tackles on Exeter ball-carriers, as well as taking one lineout throw in an all-round performance that helped Wasps avenge last season’s Premiership final defeat.

50′ WASPS TRY! @james_gaskell sprints over for his second of the day. @LimaSopoaga converts to make it…

It was a losing cause for Mark Wilson and the Falcons, but the No 7 put in nine tackles at Ashton Gate as well as scoring a try and providing 10 carries.

Narrowly missing out on a place is Tom Curry, who was part of a good loose forward unit for Sale Sharks in their win against Gloucester.

It was a weekend for physical back rowers, with Ruan Ackermann, Nathan Hughes and Sione Kalamafoni all putting in big shifts for their team.

However, the pick of the bunch was 25-year-old Jasper Wiese, who was prepared to do all the dirty work to make sure Bath could not wrestle the game away from the Tigers at Welford Road.