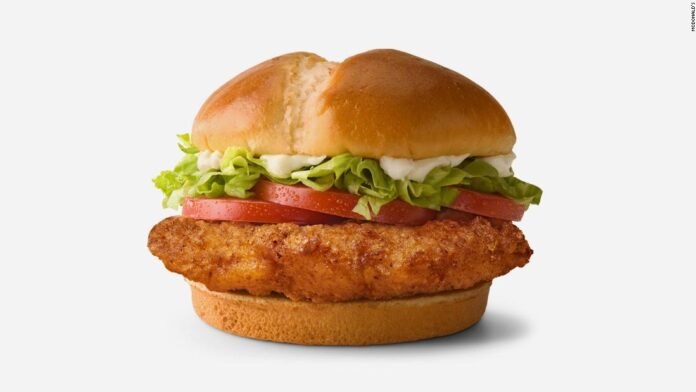 On Monday, the company announced three versions of a new chicken sandwich, which will be available nationally on February 24: The Crispy Chicken Sandwich, topped with pickles and served on a potato roll, the Spicy Chicken Sandwich, which adds a spicy pepper sauce, and the Deluxe Chicken Sandwich, which comes with lettuce, tomatoes and mayo. McDonald’s told investors in November to expect a new chicken sandwich this year.
The new products, along with faster drive-thrus and other changes, could help McDonald’s draw more traffic to its restaurants during the coronavirus pandemic and beyond.
Prior to the pandemic, the company was losing customers to fast casual chains and higher-end burger joints. The number of transactions at its US restaurants that have been open for at least 13 months slipped 1.9% in 2019, according to a filing with the Securities and Exchange Commission. That year, McDonald’s franchise operators warned that the chain needed a better chicken sandwich to win customers back. “JFK called for a man on the moon,” they wrote in a letter that summer. “Our call should be a category leading chicken sandwich.”
The burger chain, which already serves chicken nuggets and the McChicken sandwich nationally, has since tested fried chicken sandwiches in regional markets.
And during a November webcast for investors, Joe Erlinger, president of McDonald’s USA, said that “a much anticipated, delicious, new crispy chicken sandwich” would hit US menus this year.
Chicken is a good bet for McDonald’s, he explained.
“Globally, the chicken category is almost twice the size of beef,” he said at the time. “It is growing faster and represents a significant opportunity,” he said. “Developing a reputation for great chicken represents one of our highest aspirations. We want customers to choose McDonald’s for chicken.”
Erlinger added that the new sandwich would “jump-start our chicken journey,” suggesting more chicken products to come. McDonald’s launched Spicy Chicken McNuggets in the fall, its first new McNugget flavor in the United States since the item was introduced to the US menu in 1983.
Chains with a popular chicken sandwich have been rewarded by customers. Popeyes, which saw its new sandwich offering sell out just two weeks after it launched nationally in August 2019, has pointed to the sandwich as one reason that it continued to grow during the pandemic. Chick-fil-A, known for its line of chicken sandwiches, has been growing steadily for years.
Recently, the competition has been heating up. Wendy’s rolled out a new version of its chicken sandwich in October. The brand’s Classic Chicken Sandwich, made with a fried-chicken filet, lettuce, tomato, pickles and mayo, replaced the Homestyle Chicken Sandwich, which had been on Wendy’s menu for at least a decade. Over the summer, KFC tested a new, premium chicken sandwich called the KFC Chicken Sandwich.
— CNN’s Jordan Valinsky contributed to this report.