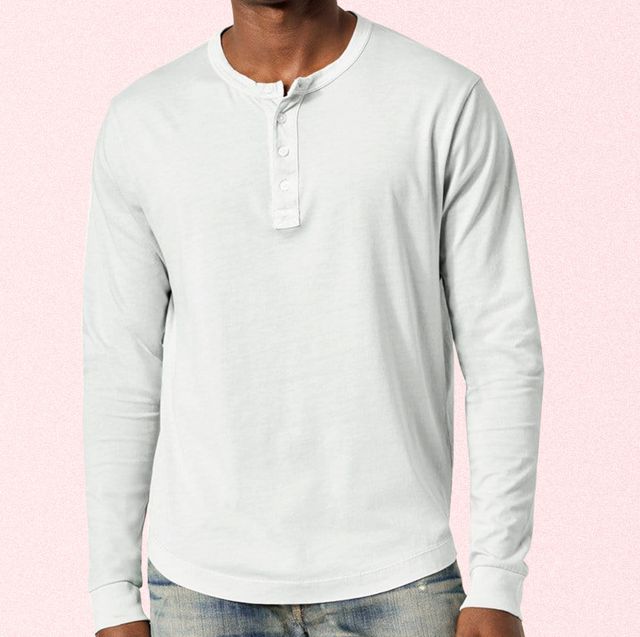 Either way, we’ve all got one: the moment that first made you think damn, I should really buy a henley. Because the henley is far more than a standard tee with a few buttons added in for visual interest (or, for that matter, a polo with the collar lopped off). No, sir. To dismiss it as such would be a grave disservice to notable henley-wearers around the world—Ryan Gosling, Kanye West, and your dear old dad very much included. The henley earned its reputation as a go-to layer for men as varied as the three above through its sheer versatility, sure, but also because it boasts a flattering design even the most ardent T-shirt devotee can get behind. Which makes it an ideal foundational piece to build any cold weather outfit around, whether you’re rocking it solo with the heat cranked up indoors or as a base layer beneath all your puffiest winter finery.

So to any and all henley novices out there: welcome to your moment. Relish it. You really only get one. To help make sure you don’t screw it up, here are 14 of the best henleys to buy right now. (And FWIW, you might want to make like Pops and call in the professionals to take a look at that sink. A good henley can do a lot, but even the best can’t turn you into the handyman you always wished you were.)

A thermal knit in a dusty shade of olive green that hearkens back to the style’s historic popularity with U.S. military members across the globe.

The only henley noted connoisseur of good taste Action Bronson swears by.

Everlane’s henley is made out of a sturdy 6 oz. cotton that offers peak coziness without compromising a bit on durability.

A nautical-inspired take fit for a long day out on the seas (or, like, curled up in front of the TV).

Buck Mason made a name for itself selling perfectly cut tees with a flattering curved hem. Thankfully, the brand takes that same approach when it comes to cheffing its smash-hit henleys, signature curved hem and all.

Cut from a soft but substantial (body goals!) brushed jersey fabric, this henley won’t just keep you warm on nippy winter nights—it’ll keep you looking cool throughout the rest of the year, too.

Looking for a style you could conceivably work out in, but definitely won’t? Look no further. (And then check out the brand’s seasonal sale to stock up on other similar goodies at a steep discount).

An elevated take on an otherwise casual style that suddenly makes the henley look a whole lot more like a sweater than a tee.

The easiest way to trick your family and friends into thinking you’ve been working out at home throughout the past year? Rock a henley cut to flatter your biceps, no matter how long it’s actually been since you did a single push-up.

The Kanye choice—or close to it.

ACW’s henley sweatshirt is plain in the same way an unadorned Rolex is…i.e. not at all. If extended ribbing and geometric designs are wrong, I don’t want to be right!

Yes, Fear of God and Zegna dropped a perfectly oversized henley in their collaboration last year, and yes, it’s some of the swankiest cozy boy shit I’ve seen in a minute.