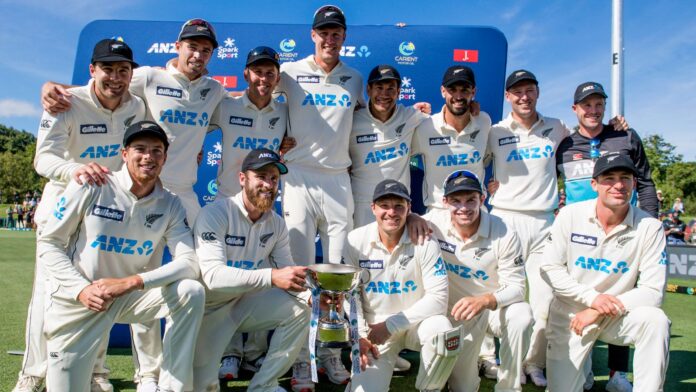 Kyle Jamieson took 6-48, taking him to 11 wickets in the match, as New Zealand thumped Pakistan by an innings in the second Test in Christchurch to win the series 2-0 and go top of the ICC’s Test rankings for the first time, overtaking rivals Australia

Kyle Jamieson took his second five-wicket haul of the match as New Zealand beat Pakistan by an innings and 176 runs in the second Test on Wednesday to sweep the series 2-0 and top the world rankings for the first time.

The young paceman took 6-48 to add to his 5-69 from the first innings as the Black Caps dismissed the tourists for 186 to seal an eighth straight home Test series triumph with victory inside four days at Christchurch’s Hagley Oval.

The win also pushed the Black Caps firmly into contention for one of two berths in June’s inaugural World Test Championship final at Lord’s.

As much as player-of-the-match Jamieson’s fine bowling, the win was built on the magnificent 238 skipper Kane Williamson scored in New Zealand’s only innings, which enabled the hosts to declare on 659-6.

“Even though the result on paper was very much in our favour, we know that when you are playing quality opposition, it’s the small margins,” Williamson, who was adjudged player-of-the-series, said after the win.

“We won those small margins and had a bit of luck go our way as well.”

Pakistan managed 297 in the first innings and only an extraordinary rearguard action was going to prevent a heavy defeat when they resumed on 8-1 after Jamieson had removed opener Shan Masood on Tuesday night.

Mohammad Abbas was caught behind off a Trent Boult delivery before Jamieson got into the swing again to send back Abid Ali and leave the tourists labouring to lunch at 69-3.

Boult dismissed Zafar Gohar, who made 37, to seal the victory for New Zealand who remain unbeaten at home since being bested by South Africa in 2016-17.

“I’m very disappointed that I didn’t get a result for Pakistan as they put their faith in me,” rued Rizwan, who led in the absence of their injured regular skipper Babar Azam.

“We tried our very best but we didn’t do very well. As the captain, as a player, I take responsibility.”