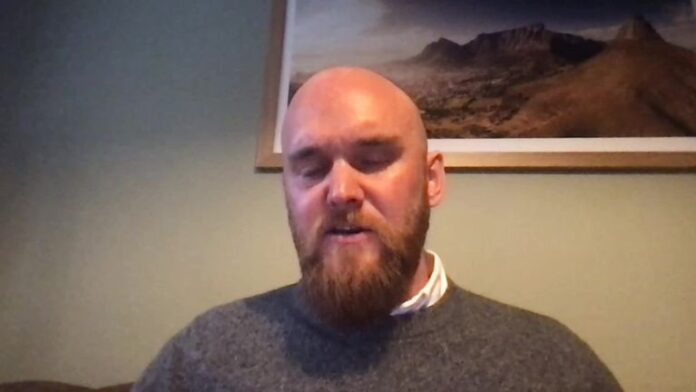 Leeds Beckett University’s Professor Ben Jones and his team are working closely with Leeds Rhinos to research concussion and player impact events. The issue of head injuries was brought back into focus by the retirement of Rhinos captain Stevie Ward

The professor leading research into the impact on players of collisions in rugby league is in no doubt the sport is taking the health risks posed by concussions seriously.

The retirement this week of Leeds Rhinos captain Stevie Ward at the age of 27 as a result of two concussions suffered early on in 2020 has kept the issue firmly in the spotlight, with rugby union and football also facing up to the long-term effects of head injuries.

Professor Ben Jones, who works with the Rhinos and the England performance unit at the RFL, believes rugby league is taking the right steps in researching and understanding both the risks posed by head injuries and how to reduce them.

“I think everyone is open, everyone is aware, and everyone takes concussion seriously,” Professor Jones told Sky Sports News.

“Everybody is devastated for where Stevie has ended up. He’s been a fantastic player for Leeds Rhinos and rugby league, and during Stevie’s career we’ve worked hard with our load monitoring, our collision monitoring, trying to support players that way.

“Everything progresses and moves forward with technology, and it will definitely help us improve with our practices which we’ve all got to acknowledge and start to do.”

The team and Leeds have spent the last year collaborating with the University of Leeds and the Prevent Biometrics mouthguard technology company to measure collision events and direct head impact both at training and in Super League matches during the past year.

It is hoped the data, gained from sensors in mouthguards, will lead to further understanding of these events and how players can better prepare themselves along with limit exposure to them.

McDermott: League must learn from other sports

Meanwhile, Sky Sports rugby league pundit and former Rhinos prop Barrie McDermott has called on the sport to heed the lessons from others.

Both rugby league and union’s governing bodies are facing legal action from former players over alleged failure to protect them from concussions.

Meanwhile, football is wrestling with the issue of a possible link between repeatedly heading the ball and dementia in later life – something which has been brought into stark focus by members of England’s 1966 World Cup-winning team being affected by the disease.

McDermott praised rugby league’s authorities for how the sport has moved on in its handling of head injuries in recent years, but wants to see more done to help protect the players of the future.

“We have, as a game, come a long way,” McDermott told Sky Sports News. “We have head injury assessments during a game where a doctor will take a player off the field, assess where he is, whether he’s fit and capable to go back onto the field of play.

“We have set times where if damage is done in that match on a Friday there is a period of time before they can come back and play depending on how serious that damage is, but we do have a long way to go.

“The first thing we’ve got to do is make it safe for the players and the young players of our game, the ones who are running around on a Saturday and Sunday morning, so there is a heck of a lot of work to do to make that element of our game safe.”