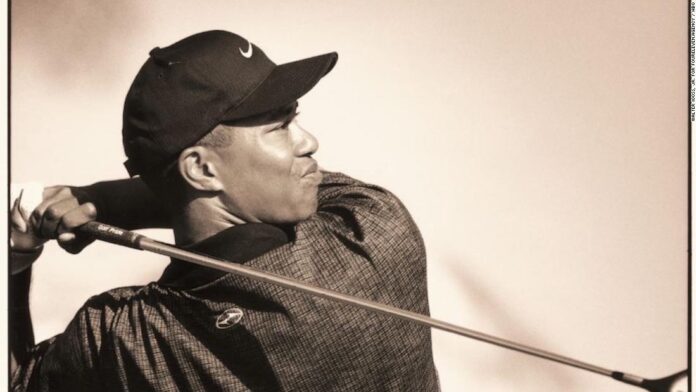 At its core, “Tiger” represents the oldest of tales: A child trained from an early age to be extraordinary in a chosen field, while sacrificing many of the usual trappings associated with childhood. Growing up that way can become a prescription for a kind of belated adolescence indulging in the perks of wealth and fame, and under the watchful eyes of an eager media if you trip up.
The key figure from that perspective becomes Woods’ father, Earl, who turned his golf-playing toddler into a media novelty — showing off his skills on talk shows — training him to be the shot-making machine who integrated the stuffy world of professional golf and simultaneously dominated it. In doing so, Tiger spurred interest in the sport, captivating the imagination of people who had never sat through a tournament before.
Journalist Charles Pierce describes Earl as “the original evangelist” of the cult of Tiger, one who described his young son’s unifying mission and future in near-messianic terms. Woods became “a cultural phenomenon as well as a sports one,” Sports Illustrated’s Gary Smith says, before essentially getting devoured by “the maw of celebrity and fame.”
Directors Matthew Heineman and Matthew Hamachek work with a producing team that includes the prolific Alex Gibney and Jeff Benedict and Armen Keteyian, whose book serves as a source for the project. They rekindle appreciation for the jaw-dropping wonder of Woods’ golfing rise, before the eventual fall.
It’s no accident the first part concludes with the introduction of Rachel Uchitel, one of the women to whom the golf prodigy was linked in a slew of 2009 tabloid headlines.
The tabloid tone dominates the start of night two, with the National Enquirer playing a significant supporting role and video of paparazzi shouting rude questions at Uchitel as well as Woods’ then-wife, Elin. Landing the Uchitel interview represents a bit of a coup, but the filmmakers could have done without the kitsch-y music when viewers first glimpse her.
Other subjects skew toward the exes in Woods’ life — including an early girlfriend, Dina Parr, and his longtime caddy, Steve Williams — along with fellow golfers and journalistic voices.
The portrait that emerges, however, proves more sympathetic than damning, particularly in regard to Earl Woods’ molding of his son and the microscope under which Tiger was forced to live, underscored by clips of comics turning revelations about his infidelity into easy punchlines.
Race is also a central part of Woods’ story, from the subtle racism he faced (see the Masters leadership publicly scolding him) to the debate when he described his mixed ancestry as “Cablinasian,” raising questions about whether he had downplayed his Black heritage.
“Tiger” tells us something about the state of media as well, including the love of a good comeback story and Nike’s “Winning Takes Care of Everything” post-scandal ad campaign, which nicely summarizes the oversized role that corporate image-making played in Woods’ career.
Crafting this sort of documentary around a current public figure is invariably challenging, especially when done without their cooperation. In addition, the project already engendered advance controversy over the dearth of people of color working behind the scenes.
Yet even with those disclaimers, both parts are well worth watching, and seemingly get about as close to understanding a figure who carefully sought to control his narrative — saying he “never liked” fame and publicity, despite growing up in the spotlight — before the wheels abruptly came off.
Given that degree of difficulty, in the best sense, “Tiger” is well above par.
“Tiger” premieres Jan. 10 at 9 p.m. on HBO, which, like CNN, is a unit of WarnerMedia.