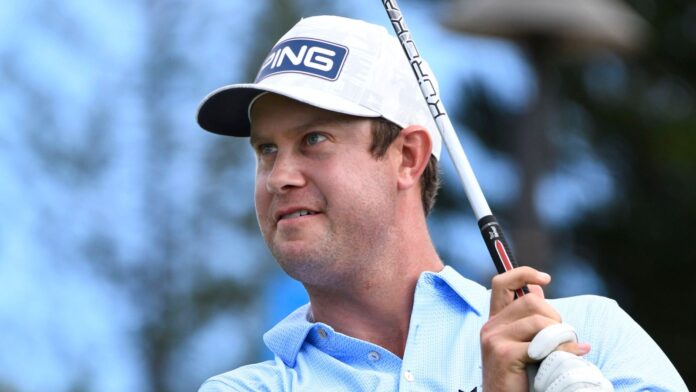 Harris English scrambles par at the last on day three to stay tied for the lead with Ryan Palmer at the Sentry Tournament of Champions, with holder Justin Thomas now four off the pace after some wayward driving.

Harris English made a clutch par-saving putt on the 18th green to retain a share of the lead with a fast-finishing Ryan Palmer at the Sentry Tournament of Champions.

English recovered from a pulled second shot to the closing par-five at Kapalua and rolled in an eight-footer to avoid his first bogey of the day, carding a 66 to stay tied for the lead with Palmer on 21 under par after day three.

Palmer had earlier birdied six of the last seven holes to return the best score of the week, a nine-under 64 which was verified after a discussion with tournament officials following an incident at the ninth.

A duffed pitch from 30 yards resulted in Palmer’s ball failing to make the green, but he kicked away a divot in frustration before his ball had come to rest after running back towards him.

It was agreed there was no intent to improve his lie for his fourth shot, his ball coming up a few yards short of the divot he had repositioned, and he got up-and-down for par before reeling off a barrage of birdies on the back nine.

Palmer made five in a row from the 12th and narrowly missed out on another from inside 10 feet at the 17th before drilling a superb second to 12 feet at the last and settling for a two-putt birdie and the clubhouse lead.

English, two shots clear of the field at the halfway stage, looked in cruise control for most of the third round, making his fourth birdie of the day at the 11th and adding another at 14 despite being plugged in a greenside bunker.

The American gouged out to just inside 20 feet and rattled in the putt for an unlikely three before picking up further shots at 15 and 16, although he appeared likely to relinquish the lead when he tugged his second to the last into the thick rough to the left of the green.

But the composed 31-year-old managed to stab his ball back into play and, after his 75-footer for birdie pulled up an uncomfortable distance short, English made no mistake with his second jab to stave off a second bogey of the event.

With the wind again less severe than traditional, the back nine produced a glut of low scores and Collin Morikawa was among the many to take advantage of the friendly conditions, making four straight birdies from the 12th and another at the last to card a second consecutive 65.

Morikawa’s eight-birdie round lifted him into outright third on 20 under, just one behind the leaders, with Daniel Berger two further adrift following an inward 32 and a solid round of 67.

Justin Thomas again struggled for accuracy with his driver, particularly in a mixed-bag of a front-nine 34 which featured an eagle at the fifth followed by a double-bogey six at the next, where he carved his drive into deep trouble and, despite finding his ball, he took an unplayable lie and headed back to the tee.

The defending champion hit back with birdies at eight and nine and made three more in a promising four-hole stretch on the back nine before three closing pars kept him at 17 under, four strokes off the pace heading into the final round.

The world No 3’s 68 saw him end the day three ahead of the two players ahead of him in the world rankings, with Dustin Johnson and Jon Rahm both missing several good birdie chances in their rounds of 69.

Big-hitting Bryson DeChambeau, meanwhile, will start the final round eight shots back after a scrappy bogey at the last completed a disappointing 70.