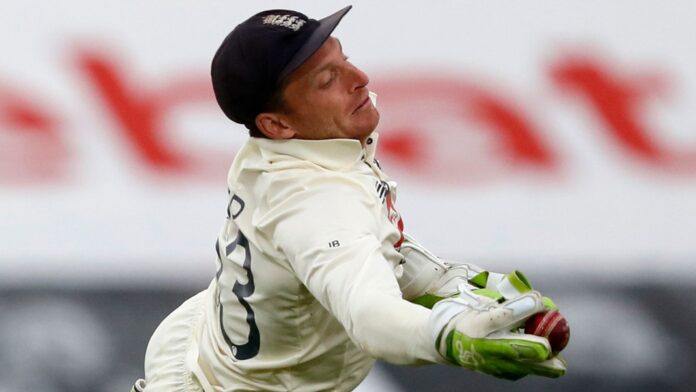 England wicketkeeper Jos Buttler says conditions in Sri Lanka will be “demanding” during two-Test series; Buttler says training with fellow gloveman Ben Foakes is pushing his game on and accepts he may be rested in India later this winter

Jos Buttler is ready for the “demanding” challenge of Sri Lankan conditions and the “healthy” competition for his place as England’s first-choice Test wicketkeeper.

England captain Joe Root said recently Buttler remained his No 1 gloveman, despite Ben Foakes impressing as batsman and wicketkeeper when the side won 3-0 in Sri Lanka in late 2018, including hitting a century on his Test debut in Galle.

Buttler struck a career-best 152 in his previous Test innings, against Pakistan at The Ageas Bowl in August, but knows his keeping must come to the fore in the two-Test series in Sri Lanka as he stands up to the stumps for the spinners during sapping sessions.

Ahead of Thursday’s first Test in Galle – which you can watch live on Sky Sports Cricket from 4am – Buttler said: “It’s obviously going to be very different from the summer. As an all-rounder you want everything firing and I know it’s going to be a great challenge for me with the bat and the gloves.

“It’s really important both of your games are on and you hope they feed off each other. To contribute to the team and winning games you really need both suits playing well.

“It’s demanding but it is also an exciting place to keep wicket. You are up to the stumps, the ball is turning, you know you are really in the game.

“It’s obviously demanding physically out here and that is part of the challenge – to have satisfaction at the end of the day that you have worked so hard and you’re tired, but that you have done your job for the team.”

Foakes is widely regarded as one of the finest wicketkeepers around and Buttler says training with the 27-year-old is helping his own game progress.

The Surrey man is likely to get a chance in the four-match series in India from February, with the England and Wales Cricket Board looking to manage players’ workload with six Tests in a short space of time at the beginning of a year which also includes a T20 World Cup and the start of the Ashes.

Buttler says no one likes to be rested but understands the ECB’s viewpoint.

The 30-year-old added: “Someone like Foakesy is a great person to push my game on. I’ve watched him practise and he’s impressive, it’s fantastic to see how good he is.

“Competition for places is healthy and can drive people on and give people hunger to improve and perform. In all departments on this tour, there is a lot of competition. That has always been the hallmark of good sides, good players on the fringes and good players missing out.

“Looking at the year ahead there is a lot of exciting cricket but, as an employee of the ECB, you have to give them a lot of credit for their forward thinking and looking after people’s mental health. They are trying to catch exhaustion or mental health issues before they even happen.

“The selectors and coaches and captains have spoken a lot about it not being ideal missing games for England. No-one likes to do that – because you don’t know exactly when you might get another one.

“But I think it has been very forward-thinking from the ECB in what is going to be an incredibly challenging year.”

Watch the first Test between Sri Lanka and England, live on Sky Sports Cricket from 4am on Thursday.