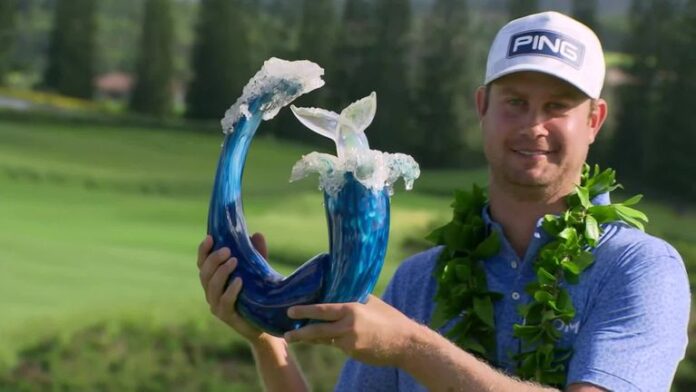 After more than seven years without a PGA Tour victory, Harris English finally claimed his third title after a birdie at the first extra hole edged out Joaquin Niemann at the Sentry Tournament of Champions.

Harris English is back in the winner’s circle on the PGA Tour after beating Joaquin Niemann in a playoff at the Sentry Tournament of Champions in Maui.

Niemann roared into contention with a closing 64 that could have been one better had he not missed a six-footer for birdie at the last, while English also had a chance to win in regulation following a stunning second to the 72nd green, only for his eagle putt to lack the required pace.

But English made no mistake from similar range on the first play-off hole, rattling in a confident putt for his first victory in over seven years after Niemann tugged his second left of the green, came up short with his chip and left his birdie putt 18 inches short.

The top two had finished tied for the lead on 25 under, one ahead of Justin Thomas after the world No 3 carded a 66 despite admitting he was distracted by the fallout from his controversial homophobic slur that marred the third day at Kapalua.

An embarrassed Thomas issued a sincere apology following his third round after he used an offensive term following a missed putt early in his round, and the incident was still on his mind throughout the final day as he battled hard to retain his title.

He would ultimately come up one shot short of the play-off after a damaging bogey at the 17th, his first blemish of the day, and a birdie at the last merely secured a podium finish as he contemplated how best to repair his tarnished reputation.

English had shared the overnight lead with Ryan Palmer, but both struggled in breezier conditions over the front nine as Niemann emerged from the pack and stormed to the top of the leaderboard.

The young Chilean carded six birdies in a superb outward 30 and picked up further shots at 11, 14 and 16 just as English hauled himself back into contention with three consecutive birdies from the 11th and another at 15, although his third bogey of the week at 16 looked to have left himself with too much ground to make up on the leader.

But Niemann did not allow enough break with his birdie putt on the final green and tapped in for a disappointing par and signed for a 64 before having a morale-boosting chat with Sergio Garcia en route to the practice ground.

Thomas needed an eagle at the last to tie, and he thought he would have a decent shot from close range as he stared down his second, only to recoil in frustration when his ball pitched short of the green and just failed to get onto the putting surface.

The two-time champion got up and down for birdie and a 66 and left the stage clear for the final pairing, with English setting himself up with an eagle putt for the outright win after a delightful high draw with a three-iron landed on the green and came to rest just six feet beyond the pin.

English’s putt lack conviction and offered a reprieve to Niemann, but the American was not to be denied and closed out the third victory of his career – and his first since November 2013 – in impressive fashion.

Palmer birdied three of the last four holes to match his fourth-place finish in his last start at the Zozo Championship in October, while Bryson DeChambeau (66) and Jon Rahm (67) ended in a tie for seventh place on 20 under with Collin Morikawa, who stumbled to a closing 73.

World No 1 Dustin Johnson had threatened something special early in the day when he recovered from a bogey at the second with six birdies over the next seven holes, but he could not maintain his charge on the back nine and settled for a 69 to finished on 18 under alongside Sergio Garcia.