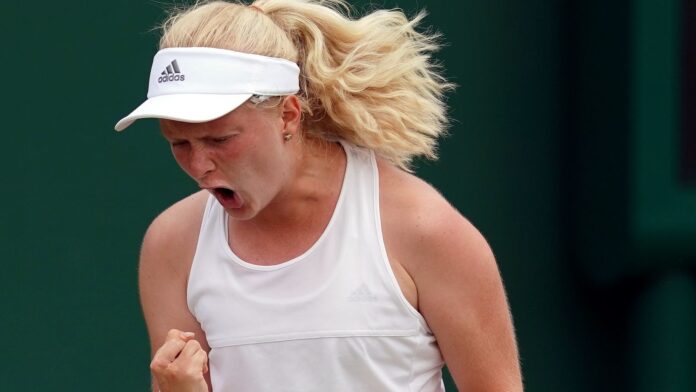 Francesca Jones, from Leeds, was born with a congenital condition that means she only has three fingers and a thumb on each hand, three toes on one foot and four toes on the other but she has not let that stand in the way of her burgeoning tennis career

Britain’s Francesca Jones is through to the Australian Open final qualifying round after defeating Jana Fett in three sets.

The women’s event is being held in Dubai and the men’s in Doha to limit the number of players who will travel and undergo quarantine in Australia.

Jones, 20, who is playing in her first Grand Slam qualifying tournament outside Wimbledon, had already beaten former top-30 player Monica Niculescu and she continued her impressive run with a fine 7-6 (9-7) 2-6 6-1 victory over Fett.

A 69-minute first set went the way of Jones on her third set point, with both players serving a host of double faults, but Croatian Fett fought back to take the second.

Jones roused herself superbly in the third, though, winning five games in a row to clinch victory and a final-round date with China’s Lu Jia-jing.

There was disappointment for British No 3 Harriet Dart in the first round. The 24-year-old reached the second round of the main draw last year after coming through qualifying but was beaten 7-5 6-2 by America’s Grace Min.

In the men’s qualifying, British No 5 Liam Broady lost his first-round match to France’s Constant Lestienne 7-6 (7-1) 6-2.

World No 187 Broady, ranked 40 places higher than Lestienne, is the second British male to crash out at the first hurdle following Jay Clarke’s straight-sets defeat to Taiwan’s Wu Tung-lin on Sunday.