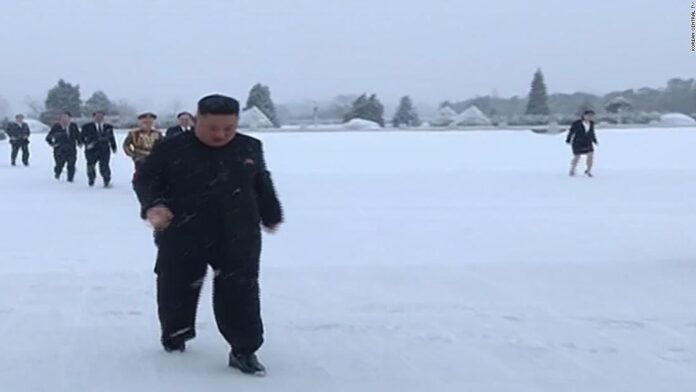 “We are only holding a military parade in the capital city, not military exercises targeting anybody nor launch of anything. Why do they take trouble craning their neck to follow what’s happening in the north,” Kim said in a statement published by North Korea’s state-run news agency, KCNA.
“The southerners are a truly weird group (and) hard to understand.”
Kim’s comments were published as an important week-long North Korean political event, the Eighth Workers’ Party Congress, came to a close. The Congress is held for North Korea’s rulers to gather and reflect on successes and failures in years past and set an agenda for the near future. They’re typically held every five years or so, but Kim’s father and predecessor — Kim Jong Il — stopped holding them after 1980. Kim Jong Un revived the gatherings in 2016.
Experts had speculated that North Korea might mark the end of the Congress with a military parade, but as of Wednesday afternoon on the Korean Peninsula, North Korean state media had not released any images or video of such an event.
South Korea’s Joint Chiefs of Staff said on Monday, however, that it had detected signs of a military parade taking place in North Korea on Sunday night. North Korea will often release slickly produced propaganda videos of these events rather than airing them live.
Kim Yo Jong appeared to confirm that a parade had taken place while mocking the South for wasting its time, even though these parades offer valuable clues about the notoriously secretive country’s weapons systems. Kim also argued that Seoul’s spying was indicative of its “hostile approach toward the fellow countrymen in the north.”
“Do they really have nothing else to do but let their military body make ‘precision tracking’ of the celebrations in the north?” she said.
Kim was believed to be one of her brother’s most powerful and trusted confidants, but experts are unsure what to make of her status following the Party Congress, which saw her removed as an alternate from North Korea’s powerful politburo and demoted from “first vice department director” to “vice department director.”
Kim’s apparent demotion may have more to do with Kim Jong Un’s focus on reshuffling the politburo to include more economic experts, according to an analysis by North Korea researcher Martin Weiser published in NK News, an outlet dedicated to monitoring the country. Others experts have speculated that she may still be taking heat for her handling of the inter-Korean relationship last summer, when she directed North Korea’s armed forces to blow up an $8 million joint liaison office in the city of Kaesong to express Pyongyang’s displeasure with Seoul.
Kim was photographed attending Congress meetings, meaning it’s unlikely she has been purged. North Korean state media aired peculiar footage with her wearing what appeared to be heels and a skirt in the frigid weather. However, she was seen walking off to the side — not in a row alongside other officials and her brother, as she’s often seen doing.
All of this points to the possibility that Kim’s title change will have little impact on what she does day-to-day.
Cheong Seong-chang, a fellow at the Wilson Center’s Asia Program and senior research fellow at the Sejong Institute, said that while Kim was effectively demoted, her statement shows that “she is still handling and controlling issues regarding South Korea.”
Thae Yong Ho, a former North Korean diplomat who defected and then became a lawmaker in the South, said that he does not take much stock in the mystery surrounding Kim Yo Jong’s official role.
“Access to Kim Jong Un is a more important indicator of power status in North Korea,” Thae said.

The main focus of the Party Congress, which began last week, was improving North Korea’s economy.
North Korea’s decision to completely close its borders to prevent Covid-19, sanctions and a series of natural disasters last year severely impacted the economy and the livelihood of average North Koreans, something Kim Jong Un committed to improving since his first days as North Korea’s leader.
However, Kim admitted in August that the five-year plan North Korea put in place in 2016 to improve the economy had failed. Two months later he tearfully thanked North Koreans for how they “bravely overcame severe hardships and trials” in 2020.
“This was a Congress focused on the failure of the last five years of economic development, and how to learn from that and get it right in the next five years,” said John Delury, a professor at Yonsei University’s Graduate School of International Relations.
However, North Korea did not make public any specific plans on how the country will improve its economy in the medium term. The speeches and statements published include typical refrains on socialism and self-reliance, but nothing that would ameliorate the structural issues of the country’s extremely inefficient command economy.
Experts who study North Korea’s economy were concerned that Kim may have hinted at a crackdown on the limited marketization inside the country, which has been key for growth.
Ramon Pacheco Pardo, the KF-VUB Korea Chair Holder at the Institute for European Studies, said it makes sense for North Korea to rein in free trade in order to “allow for greater control of the population,” but cautioned that the regime “cannot really roll back over 20 years of marketization of the economy.”

Kim Jong Un’s economic agenda may have appeared woefully short on specifics, but his plans for upgrading and improving North Korea’s conventional and nuclear weapons were anything but.
The North Korean leader announced midway through the Congress that Pyongyang was developing several new systems, including a nuclear-powered submarine, tactical nuclear weapons and advanced reentry vehicles designed to penetrate or trick missile defense systems.
While these projects are at various stages of development, experts are particularly concerned about new reentry vehicles, advanced warheads and tactical nuclear weapons, which are less destructive and used at a shorter range so they can be used in battle, unlike the more powerful so-called “strategic” nuclear weapons, which are often employed to deter enemies.
Pyongyang would likely need to resume weapons testing in order to field new warheads or low-yield nuclear weapons, and such tests would immediately draw the ire of the international community.
Advanced reentry vehicles, which deliver nuclear bombs to their targets, would degrade the efficacy of US missile defense systems. The low-yield nuclear bombs worry researchers because they’re more palatable to use as a “first strike” option.
“Those are the capabilities that are more likely to be used in a limited conflict for coercive purposes, to cover offensive objectives,” said Adam Mount, a senior fellow and the director of the Defense Posture Project at the Federation of American Scientists.
It’s now up to the incoming Biden administration in the United States to prevent North Korea from developing and fielding these weapons, which Pyongyang is prohibited from doing by United Nations Security Council resolutions.
However, prospects for renewed negotiations appear dim at the moment.
Despite Kim’s three in-person meetings with US President Donald Trump, he said he still views the US as North Korea’s biggest enemy. North Koreans, Kim said, must “do everything we can to strengthen our nuclear war deterrent and develop the strongest military capability,” in order to stand strong in the face of Washington’s so-called “hostile policy.”
Mount and other experts believe that though the US should retain its ultimate goal of ridding North Korea of nuclear weapons, Washington needs to focus on more realistic achievements in the short term.
“It’s abundantly clear that North Korea will be a nuclear nation, a nuclear armed state for the foreseeable future,” Mount said. “The bigger problems are these new systems that could pose a major stability risk.”