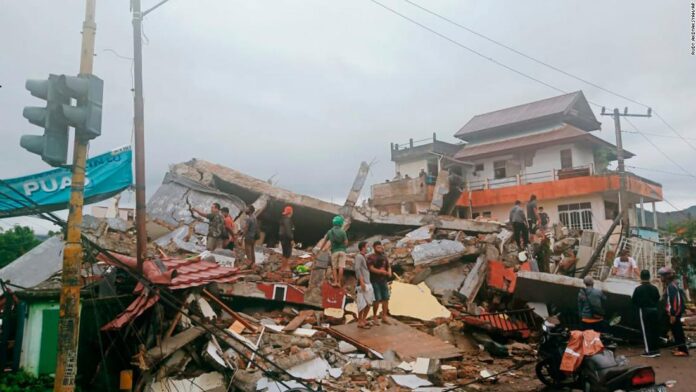 The epicenter of the quake was six kilometers (3.73 miles) northeast of the city of Majene, at a depth of 10 kilometers.
Several thousand panicked residents fled their homes to seek safety after the quake, which did not trigger a tsunami warning but was felt strongly for about seven seconds, the statement said.
The disaster mitigation agency said a hotel and the office of the West Sulwesi governor were severely damaged, and electricity supplies were also down.
Hours earlier, a 5.9 magnitude earthquake struck in the same district on Thursday damaging several houses
Straddling the so-called Pacific ‘ring of fire’, Indonesia, a nation of high tectonic activity, is regularly hit by earthquakes.
In 2018, a devastating 6.2 magnitude quake and subsequent tsunami struck the city of Palu, in Sulawesi, killing thousands of people.