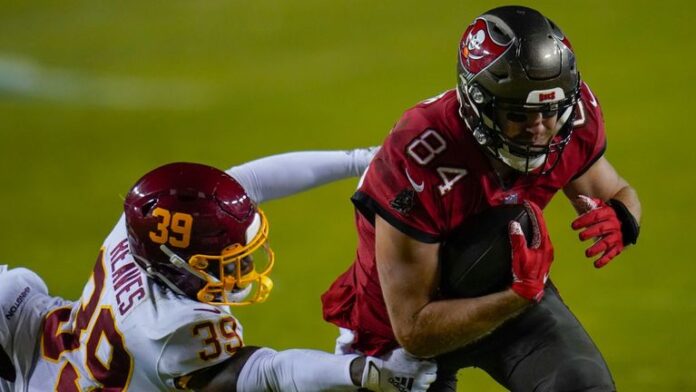 Tampa Bay Buccaneers running back Ronald Jones returned to practice on Thursday ahead of Sunday’s NFL divisional round matchup with the New Orleans Saints.

Jones was active for last weekend’s wild-card game victory over the Washington Football Team, but didn’t play after aggravating a quad injury shortly before the game.

A combination of that problem and a finger issue prevented him from practicing on Wednesday, but a limited return on Thursday is a boost for the Bucs ahead of their meeting with the Saints.

Fellow running back Leonard Fournette stepped up in Jones’ absence, rushing 19 times for 93 yards and a touchdown in Tampa Bay’s 31-23 win over Washington.

Jones led the team in carries (192), rushing yards (978) and rushing touchdowns (seven) during the regular season.

There is a changing of the guard going on right now in the NFL at the quarterback position.

Tom Brady, at 43 years old, continues to defy the doubters as he goes in search of a seventh Super Bowl, while 42-year-old come Friday, Drew Brees, is matching him almost stride for stride – and could knock him out of the playoffs this weekend.

Meanwhile, the next generation of players at the position is emerging and already beginning to take the league by storm; the defending Super Bowl champ Patrick Mahomes is just 25, and the reigning league MVP Lamar Jackson 24.

All of them have made the divisional round of the NFL playoffs this weekend, so here we take a closer look at the league’s old guard at QB and the young guns taking over…