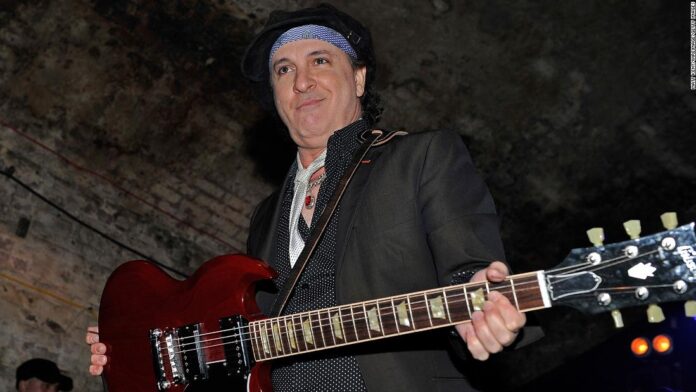 Sylvain, real name Sylvain Mizrahi, died on Wednesday after fighting the disease for two and a half years, according to the post, which was shared on Thursday night.
“As most of you know, Sylvain battled cancer for the past two and 1/2 years. Though he fought it valiantly, yesterday he passed away from this disease,” the post read.
“While we grieve his loss, we know that he is finally at peace and out of pain. Please crank up his music, light a candle, say a prayer and let’s send this beautiful doll on his way.”
Sylvain was born in Cairo, Egypt, before emigrating to New York with his family as a child.
He was a founding member of the New York Dolls, which formed in 1971 and racked up a cult following, with band members famed for their androgynous clothing, makeup and high heels.

A band that ‘heralded the future’

The band has been credited with heavily influencing rock and New Wave music. They broke up in 1977 but reformed in 2004, splitting up again in 2011.
Writing on the Facebook post, music journalist Lenny Kaye — best known as the guitarist of the Patti Smith Group — led a tribute to Sylvain. He said Sylvain was the “lynchpin” of the band.
“The New York Dolls heralded the future, made it easy to dance to,” he wrote.
“From the time I first saw their poster appear on the wall of Village Oldies in 1972, advertising a residency at the Mercer Hotel up the street, throughout their meteoric ascent and shooting star flame-out, the New York Dolls were the heated core of this music we hail, the band that makes you want to form a band,” Kaye said in the post.
“Thank you Sylvain x 2, for your heart, belief, and the way you whacked that E chord. Sleep Baby Doll.”
Tributes have poured in from the music industry.
New York Dolls front man David Johansen, now the only surviving member of the band’s original lineup, said on Instagram:
“My best friend for so many years, I can still remember the first time I saw him bop into the rehearsal space/bicycle shop with his carpetbag and guitar straight from the plane after having been deported from Amsterdam, I instantly loved him.
“I’m gonna miss you old pal. I’ll keep the home fires burning. au revoir Syl mon vieux copain.”