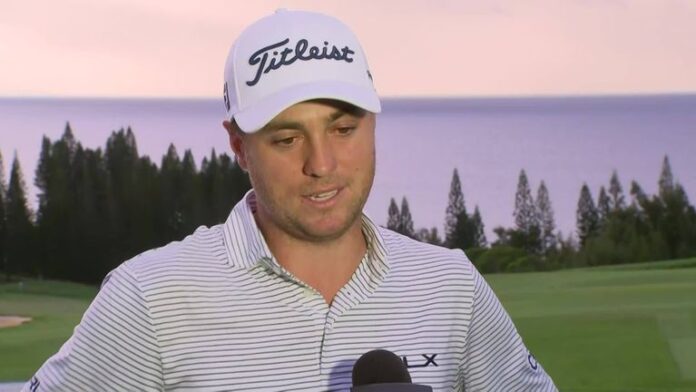 “In reflecting on the responsibility we have to all of our stakeholders, we have decided to discontinue our sponsorship of Mr Thomas at this time.” Justin Thomas’ use of a homophobic slur has cost him his sponsorship deal with Ralph Lauren.

Justin Thomas has had his sponsorship deal with Ralph Lauren terminated as a result of his audible use of a homophobic slur last weekend.

Despite Thomas apologising for the offensive language, which occurred early in his third round of the Sentry Tournament of Champions, the fashion company declared his actions as “entirely inconsistent with our values”.

The Ralph Lauren Corporation did, however, leave the door open to renewing their partnership with the world No 3 providing he “does the hard and necessary work” to promote inclusion.

A hard-hitting statement read: “At the Ralph Lauren Corporation, we believe in the dignity of all people, regardless of age, race, gender identity, ethnicity, political affiliation or sexual orientation.

“This is part of our longstanding commitment to foster cultures of belonging – in the workplace and in communities around the world.

“We are disheartened by Mr Thomas’ recent language, which is entirely inconsistent with our values. While we acknowledge that he has apologised and recognises the severity of his words, he is a paid ambassador of our brand and his actions conflict with the inclusive culture that we strive to uphold.

“In reflecting on the responsibility we have to all of our stakeholders, we have decided to discontinue our sponsorship of Mr Thomas at this time.

“As we make this decision, our hope is that Mr. Thomas does the hard and necessary work in order to partner with us again – truly examining this incident, learning, growing and ultimately using his platform to promote inclusion.”

Thomas’ slur was picked up by a greenside microphone as he berated himself for missing a short putt on the fourth green, and he admitted afterwards: “There’s just no excuse. There’s absolutely no reason for me to say anything like that. It’s terrible. It’s not the kind of person that I am.

“I need to do better. I deeply apologise to anyone and everybody who I offended and I’ll be better because of it.”

The uproar generated by his offensive slur was clearly on his mind throughout the final round at Kapalua, although he did manage to fire a closing 66 and finish just one shot out of a playoff, in which Harris English beat Joaquin Niemann with a birdie at the first extra hole.

“I clearly screwed up. I made a terrible, terrible judgment call,” Thomas said after his final round. “But I thought a lot last night that, we grow a lot as people over time. I wish that I could learn to grow a different way than the way that I chose to do it, but unfortunately it’s in the past and there’s nothing I can do about it now.

“Now I just get to take time going forward and try to become better because of it.”

Thomas returns to action on the European Tour next week and is one of the headline acts at the star-studded Abu Dhabi HSBC Championship.