Home Culture Sea shanties are your soundtrack of 2021. Seriously 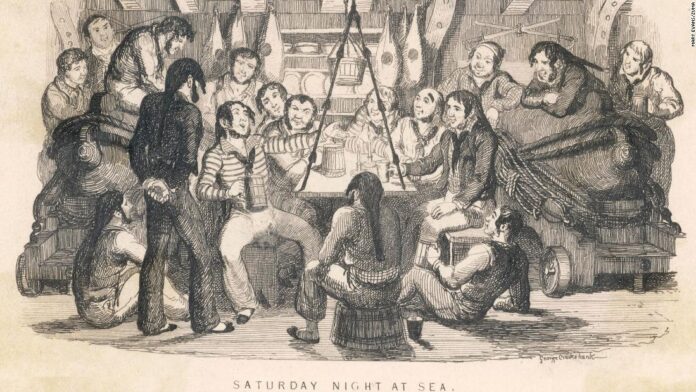 Or at least, that’s the easiest thing to tell yourself when “The Wellerman,” a 19th Century whaling song, has been knocking around in your head for a week straight.
The jaunty tune about sugar and tea and rum is the center of a very cool, well-executed trend on TikTok started by Scottish musician Nathan Evans. His version of the song, which was previously brought into modern popularity by the group The Longest Johns, has garnered almost 5 million views on the video-sharing app TikTok.
“I think it’s because everyone is feeling alone and stuck at home during this pandemic and it gives everyone a sense of unity and friendship,” Evans, the 26-year-old singer from Airdrie, Scotland, told CNN.
“And shanties are great because they bring loads of people together and anyone can join in. You don’t even need to be able to sing to join in on a sea shanty!”
Since Evans posted his song on TikTok in late December, other musicians have used the app’s duet feature to add their own voices and instruments to the mix, resulting in a harmonic kaleidoscope of renditions that have gained their own popularity. Other sea shanties took off as well (there is some difference in the definition of these maritime songs, but we’ll just stick to shanties for now). Everyone was having a good time.
Then, things got weird. TikTok users started creating dubstep shanties. Smash Mouth’s 1999 “All Star,” already a god-tier meme in its own right, got the shanty treatment. Awareness of this new nautical trend migrated to Twitter and other social media platforms. “The Wellerman” rose up the Spotify charts.
For whatever reason, sea shanties hit a nerve. And yes, you could chalk it up as another internet oddity. But surely, there must be something more here, right? Why else would people say things like “2021 is the year of the sea shanty,” or post memes about how “The Wellerman” has become part of the soundtrack of our current state of acute global and political crisis?
“I can’t tell if the whole sea shanty thing is the perfect wholesome distraction from the horror of life in 2021, or the final nail in coffin of my psyche,” Blink-182 frontman Mark Hoppus said on Twitter.
It’s true the songs are pretty catchy, and that’s by design. Shanties are a type of work song, passed around by laborers, often underpaid and overworked, to alleviate the monotony of their toil.
Monotony and economic uncertainty? In our 2021? Maybe it’s not so much of a stretch after all.
This shanty moment is also another example of TikTok’s cultural range. The video-sharing app regularly catapults meme music into chart-topping bangers and transforms already-big hits like Cardi B’s “WAP” into major cultural moments. (And yes, there are now sea shanty versions of “WAP,” too.) This is where a fun joke about a “Ratatouille” musical, of all things, can become a real event, and where tunes from the past, whether it be Fleetwood Mac’s “Dreams” or a 19th century nautical ditty, can be remixed and reborn in an instant.
And all of this happens because one person sees what another has done, and decides to join in. In fact, Evans says that’s been his favorite part of watching the trend grow.
“So many people have joined in, and also the happiness and joy it has brung so many other people, it is absolutely incredible,” he says.
This type of exchange is literally the basis of folk traditions, and one of the reasons sea shanties and the music of everyday people is kept alive through history and across cultures.
Was this just the right moment in time, when, isolated and restless, craving release from political upheaval and existential worry, people chose to reach across oceans and engage in a little sea shanty obsession?
Maybe. Or maybe it shouldn’t make sense, and we should just roll with it.