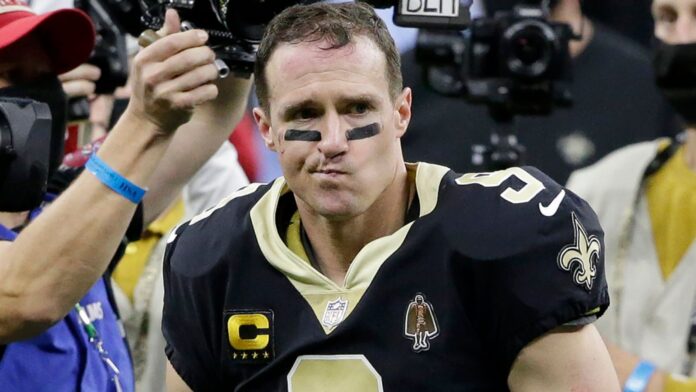 Tom Brady is heading for a 14th Conference Championship appearance of his career, and a first with Tampa Bay; the Buccaneers travel to Green Bay to take on the Packers next Sunday – live on Sky Sports NFL from 7pm

Drew Brees threw three interceptions in what is rumoured to be the final game of his NFL career, as his New Orleans Saints were knocked out of the playoffs with a 30-20 divisional round defeat to the Tampa Bay Buccaneers on Sunday.

Brees (42 years old) and Tampa quarterback Tom Brady (43) became the oldest QBs to ever compete in a playoff game, but it is the latter who now advances to compete in a 14th Conference Championship game of his career – the six-time Super Bowl winner’s first with the Buccaneers after moving from the New England Patriots in the offseason.

Neither of the veteran signal-callers played particularly well in this one. Brady completed only 18 of his 33 attempts for 199 yards, though he did toss two touchdown passes and ran in another himself. He also, crucially, did not turn the ball over.

Brees, meanwhile, was responsible for three of four total Saints turnovers. They’d prove costly errors, with Tampa Bay scoring three touchdowns off the back of the four takeaways.

Brees completed 19 of 34 passes for 134 yards and a touchdown to go with his three picks. He struggled throughout the game to throw the ball vertically down the field, relying instead on short-yardage gains which the Buccaneers defense was well-equipped to defend.

The one time New Orleans were able to benefit from chucking the ball deep, it was former Bucs quarterback, and current Saints back-up, Jameis Winston who provided a spark, finding Tre’Quan Smith on a 56-yard touchdown strike.

That play saw the Saints regain the lead, 13-10, after Brady had ended a run of field goals to open the game by picking out Mike Evans in the endzone for a three-yard score – following Brees’ first interception of the game.

A second of three Ryan Succop field goals on the night tied the game up in the final seconds of the first half, but the Saints started the stronger after the break, with Brees throwing a 16-yard touchdown pass to Smith on their opening series.

However, on their next possession, New Orleans tight end Jared Cook fumbled the football, helping to set up a six-yard scoring strike from Brady to Leonard Fournette to again tie the game up at 20-20.

A 36-yard Succop field goal soon after had the Bucs up by three, before Devin White came down with Brees’ second interception and Brady took full advantage by running in for a goal-line score with five minutes remaining.

Trailing by 10, a desperate Brees tossed a third and final pick as Tampa Bay closed out the game, avenging their two regular-season losses to the Saints and marching on towards Green Bay for a meeting with the Packers in the NFC Championship game next Sunday.