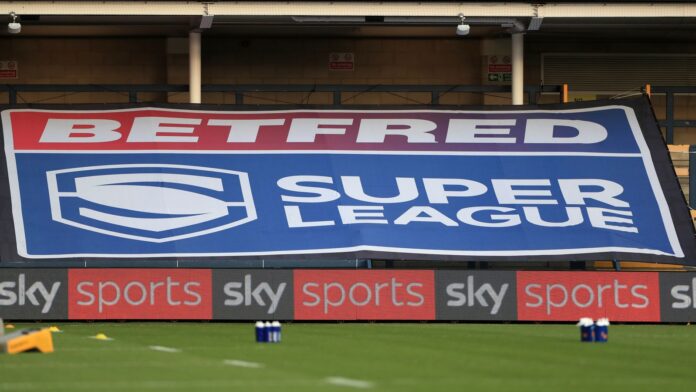 In an exclusive interview with Sky Sports Rugby League, Warrington Wolves CEO Karl Fitzpatrick pays tribute to all associated with the sport of rugby league for their efforts to combat the impact of Covid-19. Fitzpatrick also address the season delay, lessons learnt and Greg Inglis.

Warrington Wolves CEO Karl Fitzpatrick has told Sky Sports he is “incredibly proud” of all associated with the sport of rugby league, for how they have handled the impact of Covid-19.

Speaking exclusively as a guest on this week’s Golden Podcast episode, Fitzpatrick paid tribute to the sport in the wake of news the Super League season has been delayed by two weeks to March 25.

“It’s been absolutely incredible,” Fitzpatrick told Sky Sports. “The hurdles, the challenges, that have been continually thrown at the game.

“However I’m so proud to be involved in rugby league, because the adaptability, the nimbleness, the ability to basically do whatever it takes to ensure the game has a future and survive has been incredible.

“And that’s right through the players. When the rest of the world was social distancing and staying apart – and continuing to do so – the players have been going into battle, grappling, wrestling, tackling each other. Doing all that on reduced pay as well.

“Then you look at the governing body, and they are dealing with the situation fantastically well. They managed to secure a loan from the government before any other sport.

“Then you look at Super League, who have been the driving force behind putting games on. Changing fixtures, rescheduling the season, and as you are aware we have just announced we are moving the season back slightly. And again that just shows how adaptable the sport is, and you need to be in these times.

“I am so proud of the sport and what we are doing at the moment. And I am very confident due to the willingness, the attitude of the players, staff, RL and Super League, that we will come out the other side.”

Officials announced in November the new season would begin on March 11, but the latest national lockdown due to the ongoing coronavirus pandemic forced a rethink.

Following discussions with Sky Sports, Super League teams agreed to move the season back to increase the prospects of starting the campaign in front of fans, which is seen as essential for the long-term survival of the clubs.

“It’s not the same. Regardless, it’s just not the same without supporters and we’re doing all that we can to ensure we get supporters back for the start of Super League.

“One issue we have got is that we cannot push the Grand Final back due to the World Cup at the end of the year, which will be superb for the competition in the UK.

“But because of that fixed date, we can’t really push the season back any further without losing more games. So it is a balancing act.”

What are the sort of lessons that have been learnt throughout this pandemic that may help going forward?

“There was a myriad of new rules and regulations that the players had to adhere to, and they are ever evolving, ever changing.

“Due to the situation being so dynamic, things change on a weekly, if not a daily basis, and the players are having to adapt.

“The players have become accustomed to some of the compliances that are in place now a little bit better. Travelling on their own, testing twice a week. Little things like that were brand new to the players last year, but this year they are more used to it now.

Having signed Australia legend Greg Inglis to Warrington for 2021, Fitzpatrick, while admitting the 34-year-old has not arrived as a ‘Marquee’ player, says seeing the Aussie play in Super League is hugely exciting.

“Greg’s contract reflects the financial situation that we’re currently operating in. And as Greg said himself, he’s not come over for the money,” Fitzpatrick said.