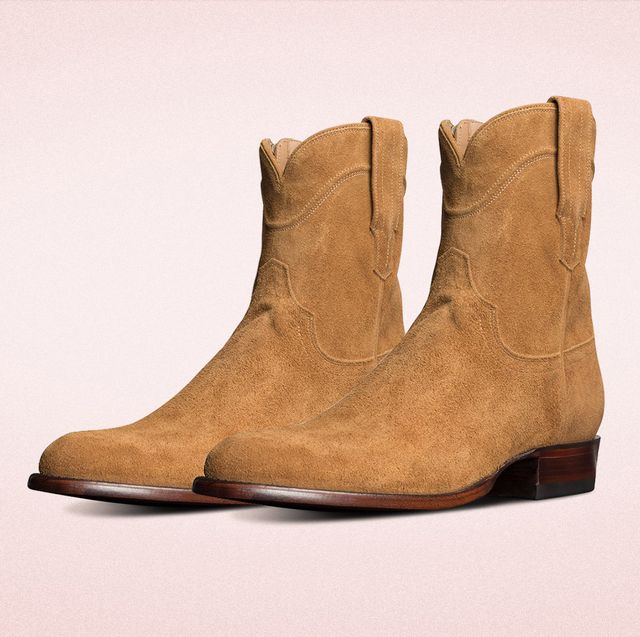 If you’ve been reading this site at all over the last year (thanks, man!) you’re probably aware Western style is having a serious moment. These days, it’s hard to log onto Instagram without scrolling past a dude in vintage cowboy boots parading around your timeline like he’s the second coming of John Wayne himself. For obvious reasons, most style-related plans in 2020 didn’t exactly pan out. But in a post-vaccine world, the boots you’ll want to reach for when the time comes to dominate the dance floor once again will look a lot like the ones below: Western-inspired—and very much ready for the honky-tonk—though not necessarily what might you call cowboy boots, per se.

There are, of course, traditional offerings from veterans of the genre like Lucchese—and some very handsome ones at that. But there’s also a whole host of options that pay tribute to the OG silhouette without making you look like an extra on the set of The Treasure of the Sierra Madre. Think of them as modified Chelsea boots, but with a narrower vamp and a slightly more substantial heel. (Some of them, in fact, are just that.)

And FWIW, a short note on those heels: Don’t fear ’em! Sure, the added height can take a little getting used to—and the look might not be for the, ah, faint of style, so to speak—but once you’re on board, there’s no going back. Because these boots are made for…well, you know what I mean. Giddy-up.

Aldo’s relatively pared-down option can wrangle up cattle with the best of ’em. A shining rand by the back heel adds a dash of eye-grabbing design to a sleek ankle boot that makes no effort to hide its Western origins.

Rhodes’ aptly named Roper boots are handmade out of premium waxed cowhide in Leon, Mexico, by expert craftsmen who’ve been doing this for decades.

If any one brand can be credited with restoring the Western-inspired boot to its rightful place of prominence in the rotation of dudes the world over, it might be Tecovas, the brand behind the boots so good we had no choice but to officially endorse ’em back in 2019.

Frye’s Goodyear-welted boots take inspiration from old-school Western styles while updating the tried and true cowboy silhouette with details that bring the shoe firmly into the here and now.

Martine Rose turns her sly, sardonic eye towards the footwear of choice for the the Wild West with predictably Martine Rose-y results—spur-shaped panel of snake-effect leather and all.

Details like an elongated toe and a stacked heel add up to a distinctive design that could only come from the Swedish fashionphiles at Acne Studios.

Lucchese’s been making some of the best boots in the business since the brand set up shop in the late 1800s.

The boots that were damn near everywhere throughout the 2010s still look as solid as ever almost a decade later.

Whoo, boy. That croc finish is having a serious effect on me, all right.

For the absolute swankiest take on whatever it is you’re looking for, you go to Tom Ford. Hey, I don’t make the rules around here. If you got a problem with it, take it up with the man himself.