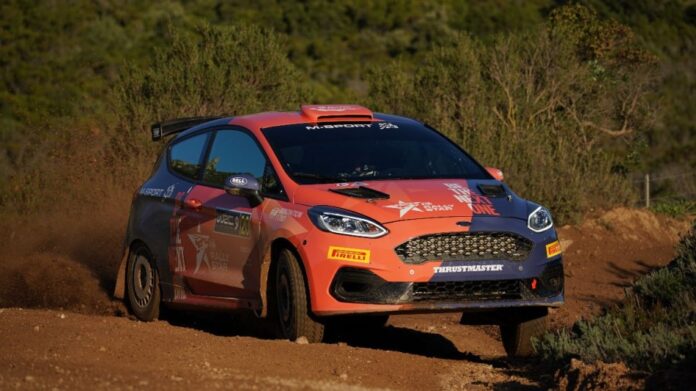 Supported by the FIA Innovation Fund, FIA Rally Star has a very simple remit: to find the next FIA World Rally Champion. Working with 146 national sporting authorities (ASNs) around the world, FIA Rally Star will make the sport more globally accessible than ever before.

Two countries forging ahead in their plans to hunt the next Sébastien Ogier, Ott Tänak, Thierry Neuville or Elfyn Evans, are Georgia and Finland. China, Estonia, Peru, Australia and Mexico will follow for the next round of events.

The message is simple: aged between 17 and 26? Own WRC 9 on a PC, PlayStation or Xbox? Then you’re fully equipped and good to go on this, the FIA’s most exciting journey of discovery ever.

FIA Rally Star success for a driver will mean a four-year programme designed to carry them to the forefront of the FIA World Rally Championship and deliver their first professional contract.

Lowering any barriers to entry is key to this programme, which is why fiarallystar.com is available in Arabic, Chinese, English, French, Portuguese, Russian, Spanish, with sections in Georgian and Finnish.

Finland and Georgia first to organise Digital and Slalom

Finland will be the first country anywhere in the world to begin the FIA Rally Star process when it commences its Digital Challenge in Oulu on February 13. On the following day, Georgia will organise the first Slalom Challenge in the city of Tbilisi.

As selection events, both the Slalom and Digital Challenge are available to ASNs around the world. The Digital Challenge utilises the FIA World Rally Championship’s very own WRC 9 game and M-Sport’s all-new Ford Fiesta Rally3 on Thrustmaster simulator rigs. After that initial event, AKK Motorsport will head to Jyväskylä – close to the heart of all rally fans – Tampere and Vantaa for the fourth and final opportunity to become one of nine (eight winners plus one wildcard) Finns aged between 17 and 26 going to the European Final.

The Slalom is a physical driving challenge, with entrants all using the same car, on the same tyres with the same level of fuel. The Georgian Automobile Sport Federation (GASF) will host a total of four slalom events in different cities (Tbilisi, Kutaisi, Batumi and Telavi). Six successful competitors will be selected at Georgia’s national final. Those drivers then progress to the European Continental Final (there are six Continental Finals: Europe, North America, South America, Asia-Pacific, Africa, Middle East and North Africa) later this year.

For both the Slalom and Digital Challenge, candidates register at fiarallystar.com. Joining onsite is available, providing there are places free once registration has closed online. And any competitor can participate in a maximum of two Challenges organised by their ASN.

How to progress to the Continental and Womens’ Finals

ASNs can run a mixture of both Digital and Slalom Challenges and doing so offers up to 15 places at the Continental Final. Eight winners from Digital, six from Slalom and one wildcard.

For every five competitors put forward by an ASN, one has to be female. A full complement of 15 would mean at least three women moving through the ranks.

Six of those females will be selected for the Womens’ Final, with the successful competitor moving into the Training Season in 2022.

Start your career on the sofa

You can even qualify for an FIA Rally Star Continental Final from the comfort of your own home.

#RallyAtHome Challenge offers a series of 12 WRC 9-based competitions between February 13 and August 5. Competitors register for the FIA Rally Star downloadable content, then have up to 100 free practice runs at a unique and previously unseen stage before five timed runs. The fastest time at each of the individual 12 challenges lands a place in the Continental Final corresponding to their home address.

#RallyAtHome challengers can use their own preferred hardware, but the stage, the weather conditions, the time of day and the car are all decided by the FIA and Nacon.

2021 is roll-out year for FIA Rally Star. This is the year thousands of drivers from all around the world will make good on their hopes, dreams and aspirations of doing all they can to be the next Sébastien Ogier. After Digital, Slalom and #RallyAtHome Challenges have run around the world, the spotlight is on the Continental Finals and Womens’ Final, where the competition goes up a gear with the use of the XC LifeLive TN5 Cross Cars.

Seven drivers (six from the Continental Finals and one from the Womens’ Final) will take part in the 2022 Training Season. This will encompass a comprehensive programme including FIA-delivered training, eight practice days and six rallies in an M-Sport Ford Fiesta Rally3. At the end of next year, the FIA Rally Star Committee will evaluate the seven drivers to see which have best reached progress and performance targets in order to decide the four – including one female – drivers to progress to the FIA Junior World Rally Championship programme in 2023.

Those four drivers will follow tailored training and practice sessions and, again, be required to meet progress and performance targets. The FIA Rally Star Committee will then select three drivers to compete in a second FIA Junior World Rally Championship campaign in 2024. The aim for one of the three drivers is to win the FIA JWRC title – such success would mean at least six rounds of the World Rally Championship in a Rally2 car in 2025.

Their online video tutorials will help guide the participants and fans through what’s going to be a fascinating process of whittling thousands of drivers down to the three making it all the way into FIA Junior World Rally Championship season two in 2024.

The first tutorial, answering the question: What is FIA Rally Star?

Video of What is FIA Rally Star? | Episode 1

The FIA Innovation Fund supports new, high-impact ideas from the FIA family that generate lasting benefits for the global FIA community and beyond. As such, the Fund is seeking to be a game changer in the way motor sport is conducted as well as the future of mobility. FIA Rally Star fits perfectly with the Fund’s ambition and is expected to attract more diverse participation in rallying around the world.

FIA Rally Star couldn’t ask for a better, more perfectly aligned car partner in M-Sport. The British-based multiple FIA World Rally Championship-winning firm is the first in the world to offer a car across every class of the FIA’s structure – ranging from the state-of-the-art Rally1 hybrid machine currently under development all the way through to the entry level Fiesta Rally5. M-Sport’s ground-breaking Fiesta Rally3 is the car of choice for both the Digital Challenge and – in a more physical form – 2022’s training year.

Pirelli’s history both in rallying and in driver development programmes is second to none. The Italian tyre firm – via its Pirelli Star Driver scheme – helped springboard the likes of Ott Tänak and Hayden Paddon into the FIA World Rally Championship. The Milanese firm supplies the world series across all its main categories and will provide tyres for all aspects of FIA Rally Star.

Headed by Yannick Neuville – brother of Hyundai Motorsport driver Thierry – LifeLive will supply Cross Cars used in the six Continental Finals and the Womens’ Final. Both Neuville brothers have had plenty of input into a machine which offers performance, but also demands the skills necessary for those seven drivers looking to progress into 2022.

The Digital Challenge side of FIA Rally Star wouldn’t be possible without Nacon’s superb WRC 9 game and Thrustmaster’s world-leading gaming accessories. Since being founded in 1973, OMP Racing has supplied a multitude of world champions with all their racewear needs. The Italian firm, which recently acquired Bell Helmets will do the same for FIA Rally Star.