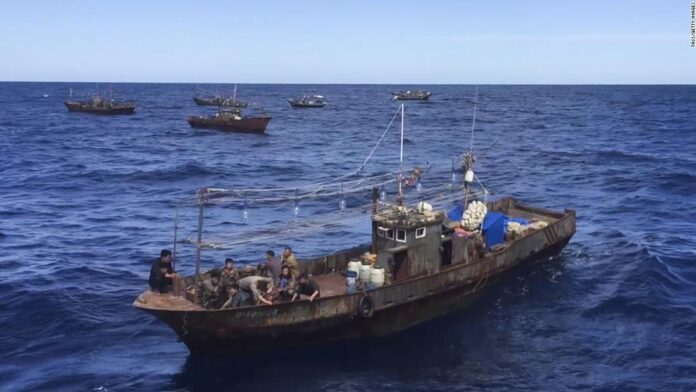 Research from nonprofit Global Fishing Watch found that the number of aggregate days North Korean vessels spent squid fishing in Russian waters dropped 95%, from 146,800 to 6,600. Squid fishing in North Korea’s own territorial waters also suffered a massive decline.
The ships are referred to as part of North Korea’s “dark fleet” because they do not publicly broadcast their location or appear in public monitoring systems, often in violation of global maritime regulations. Dozens of these ships, which are poorly equipped to travel long distances, have washed up on Japanese shores in recent years, sometimes with dead sailors aboard.
Global Fishing Watch used satellite imagery and other maritime monitoring technologies to track the number of squid fishing ships over the May to November fishing season. Squid fishing is among the easiest operations to track from afar because it is usually done at night with powerful lighting equipment.
Squid is popular throughout Northeast Asia, and rising demand in recent years has threatened the sustainability of the already dwindling squid stocks in the region, according to Global Fishing Watch. In North Korea, squid is fermented, pickled, barbecued, stir-fried or dried and served as a snack.
Jaeyoon Park, a senior data scientist at Global Fishing Watch, said the unprecedented decline appeared to be due to the stringent entry and exit controls North Korean leader Kim Jong Un put in place to keep Covid-19 out of the country.
Experts believe Kim sealed North Korea’s borders last year and severed the last of its scant ties with the outside world because he knows Pyongyang’s decrepit health care infrastructure would be overwhelmed by a coronavirus outbreak.
North Korea says it has not contracted a single case of Covid-19, a claim most experts dismiss as propaganda. But the country has seemingly been spared from a major wave of infections, thanks in part to stringent anti-epidemic measures, controls on the movement of people and the border lockdown.
Those preventative measures, however, have proven costly. Trade between Beijing and Pyongyang — an economic lifeline most experts believe North Korea needs to keep its people from going hungry — dropped by more than 80% in 2020, according to data from China’s customs agency published Monday.
Nearly 10.1 million people suffer from food insecurity in North Korea and are in “urgent need of food assistance,” according to an April 2020 report from the United Nations Office for the Coordination of Humanitarian Affairs.
Pyongyang often struggles to adequately feed its people because of economic mismanagement, international sanctions and the country’s dearth of arable land and modern agricultural equipment. But things are almost certainly worse now due to the tightened border restrictions and heavy rains this summer that flooded farmland and destroyed crops.
While there appears to be enough food to go around, the supply is under more strain than at any time since the famine of the 1990s, according to Chad O’Carroll, the CEO of Korea Risk Group, which produces North Korea publications NK Pro and NK News.
“We can safely say there are nationwide shortages of several key food types,” he said.

North Korean fisherman often operate illegally outside the country’s own waters because of overcrowding.
Pyongyang allegedly sold its territorial fishing rights to other countries, according to United Nations investigators, despite the fact that fishing in its waters or trading in North Korean fish violates international law.
The trade, which was worth an estimated $300 million a year, was sanctioned in 2017 by the UN Security Council as part of its effort to punish the Kim regime for its repeated ballistic missile tests that year.
A groundbreaking study published by Global Fishing Watch in 2020 found that squid fishing ships with ties to China were operating in North Korean waters and displacing North Korea’s own fishing fleet, forcing many in rickety boats to sail farther from home into rougher, more dangerous seas.
Many did not survive the journey.
Global Fishing Watch’s Park said squid fishing in both Russian and North Korean territorial waters dropped dramatically in 2020. During the peak of the season from September through November, Global Fishing Watch found 50% fewer ships of Chinese origin operating in North Korean waters than it did over the same time in previous years.
North Korean squid fishing boats, however, did not take advantage. There was no corresponding increase of North Korean squid fishing in the country’s own territorial waters, so it’s likely a large amount of North Korea’s squid supply “completely disappeared in 2020,” Park said.