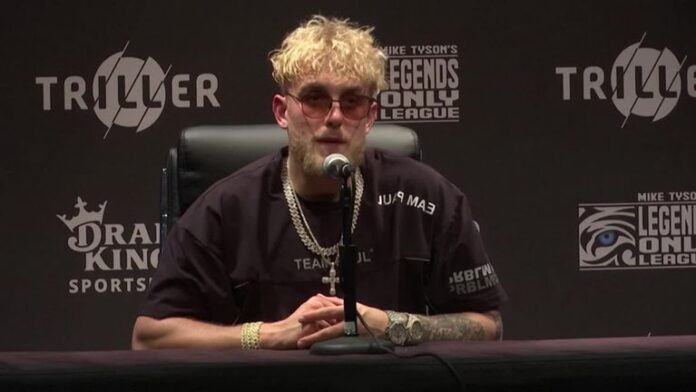 “Conor McGregor says ‘if it makes money it makes sense’ but is afraid to lose to a ‘YouTube kid’,” says Jake Paul who will headline a boxing event on April 17 hosted by Snoop Dogg

Jake Paul flew an aeroplane over Miami Beach with a banner reading “Conor McGregor is scared of Jake Paul” after confirming his return to boxing.

Paul also posted on social media: “McGregor says ‘if it makes money it makes sense’ but is afraid to lose to a ‘YouTube kid’.”

YouTuber star Paul is planning a boxing match on April 17 at an event called ‘The Fight Club’ run by the rapper Snoop Dogg, the social networking app Triller and Ryan Kavanaugh.

No opponent or location has yet been confirmed for Paul’s fight.

Paul has won both of his professional boxing matches, beating fellow YouTuber AnEsonGib a year ago then brutally knocking out former basketball player Nate Robinson in November.

The target of Jake Paul’s mockery, McGregor, is in UFC action on Saturday night against Dustin Poirier and famously lost his boxing debut against Floyd Mayweather in 2017.

Jake Paul said about his return to the ring: “Hate me or love me, you can’t stop me. April 17th, I headline a global PPV event and I am getting my third knock-out in a row. I look to prove to the world that I am and I will remain one of the biggest names in this sport.”

Snoop Dogg said: “Jake Paul had viewers around the globe shocked during his last fight, which led to an unforgettable KO. Like the last event hosted by Triller, this fight will have fans talking for months.”

Mike Tyson and Roy Jones Jr’s exhibition bout was hosted by Triller – Paul knocked out Robinson on the undercard.

“Jake Paul was the breakout athlete of the night, and we listened to the more than 30m fans that have expressed interest in watching him fight again,” said Ryan Kavanaugh.