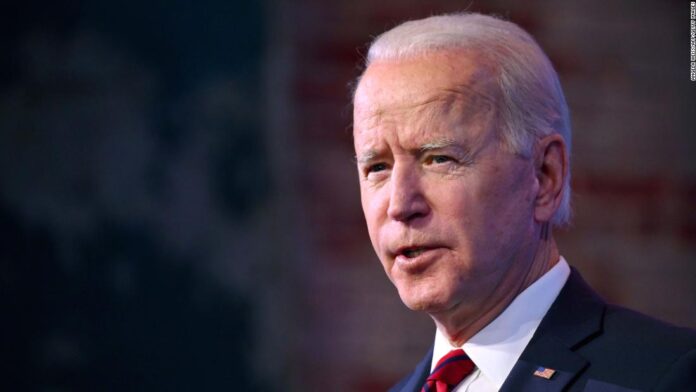 Joe Biden, as former President Obama’s vice president, learned that painful lesson firsthand. That’s why Biden is taking a go-big, or go-home approach now that he’s inheriting a fragile economy and the worst pandemic in a century.
Biden’s $1.9 trillion American Rescue Plan shows that he’s determined to avoid repeating the mistakes of the Great Recession — if Congress lets him.
“If we look back and think this plan was too big, that would be a regret that would be fine to live with,” Jason Furman, one of the architects of the 2009 stimulus plan, told CNN Business.
Furman, a former top economic aide to Obama, recalled that the team wanted a $1 trillion stimulus package in 2009 — or roughly 25% bigger than the record-setting legislation that ultimately got through Congress.
“The recovery was slower from the financial crisis because the stimulus wasn’t bigger,” said Furman, who served as one of Obama’s top economic advisers.
By contrast, economists say the Biden plan should help the US economy ride out the next six months or so of the pandemic, which has killed more than 400,000 Americans.

The $1.9 trillion plan includes $1,400 stimulus checks, a $15 federal minimum wage, $350 billion in state and local aid, enhanced unemployment benefits, help for the hungry and $25 billion in rental assistance.
The goal would be to help Americans in need, especially those whose livelihoods are linked to industries crushed by the pandemic like restaurants, hotels, airlines and cruise lines. The United States lost jobs in December for the first time since the spring. The nation is still down 10 million jobs during the pandemic.
Crucially, Biden is proposing spending big, for the first time during this pandemic, on the health crisis itself. His plan calls for $400 billion to keep schools open, speed up vaccinations and improve testing.
“One of the lessons of 2009 was that the argument that you could start modestly and then keep adding if the economy did not improve ran into a political reality,” Austan Goolsbee, a former Obama economic adviser, told CNN Business. “President-elect Biden was there. You can already see they’re not going to repeat that scenario.”
If enacted — and that’s a huge if — the US economy would grow by a sizzling 8% in 2021 and the job market would return to nearly full employment by the fall of 2022, according to projections by Mark Zandi, chief economists at Moody’s Analytics.
However, Biden’s stimulus plan will face opposition in Congress. Zandi expects Biden’s American Rescue Plan will get whittled down to just $750 billion. That in turn would leave US GDP growth at about 5%.
Goldman Sachs is a bit more optimistic. After Biden released his plan, the Wall Street bank raised its estimate of fiscal relief from $750 billion to $1.1 trillion. And Goldman Sachs now expects US GDP growth of 6.6% this year, up from 5.9% before Democrats took control of the US Senate.

One vexing problem for Biden is how to convince lawmakers — and the public — to add to America’s $27 trillion pile of debt. Republicans cast aside their debt concerns to pass the Trump tax cuts and bipartisan spending surges, but deficit hawks are going to make their voices heard again — as they did during the Obama era.
There’s no doubt that the United States faces an unsustainable fiscal situation. But the Biden team is arguing now is not the time to worry about the debt.
Janet Yellen, Biden’s nominee for Treasury secretary, also knows the firsthand the risk of Congress failing to forcefully address a crisis. Yellen led the Fed at a time when it was under enormous pressure to boost the sluggish recovery from the Great Recession.
“With interest rates at historic lows, the smartest thing we can do is act big,” Yellen told lawmakers Tuesday. “In the long run, I believe the benefits will far outweigh the costs.”
Yellen also emphasized that inequality is a serious problem that must be addressed by bold government policy.
“Well before Covid-19 infected a single American, we were living in a K-shaped economy,” Yellen said, “one where wealth built on wealth while working families fell further and further behind. This is especially true for people of color.”
Some business leaders agree with the need to think big now.
Asked by CNN Business about the national debt, Walmart (WMT) CEO Doug McMillon acknowledged Tuesday that politicians must address the budget, but not until the pandemic passes.
“Let’s address the crisis right in front of us. Get growth going in the economy, which is the best way to pay down that debt,” McMillon, chairman of the Business Roundtable, said during a call with reporters.

Others fear the United States is moving too quickly given that Congress just enacted a $900 billion relief package last month.
“I do think they’re doing too much. At some point, it becomes irresponsible,” said Lindsey Piegza, chief economist at Stifel.
Piegza described the surging US debt-to-GDP as “alarming” and called for a “smaller, more targeted approach.”
Furman, the former Obama adviser, agreed that Biden’s proposed stimulus checks “could be more targeted.” He suggested a lower income cutoff before Americans would receive the full $1,400.
However, Furman dismissed concerns about the US debt because the federal government’s interest payments are low and falling due to historically cheap borrowing costs. Even the International Monetary Fund, which traditionally emphasizes concerns about debt, is telling countries to be ambitious.
Recall that deficit concerns, along with the rise of the Tea Party, caused the United States to cut spending during Obama’s first term, long before the economy had healed from the Great Recession.
At the time, the Tea Party was threatening to make the United States default on its debt. And Biden helped lead those tense budget negotiations with Congress.
“The premature shift to austerity certainly slowed the economic recovery,” Furman said. “For a lot of people, that lesson has been learned.”

‘WandaVision’ caps off Marvel’s version of a love story in an...