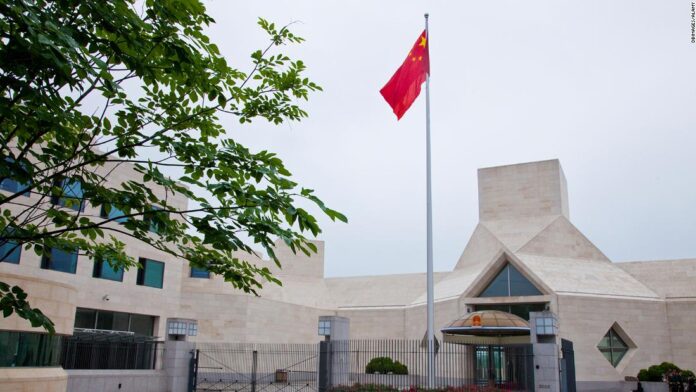 The retort comes after Twitter (TWTR) temporarily locked the account of the Chinese embassy over a tweet it posted defending Beijing’s treatment of Uyghurs. The post, which was made earlier this month, claimed that Uyghur women in Xinjiang were no longer “baby-making machines.”
“In the process of eradicating extremism, the minds of [Uyghur] women in Xinjiang were emancipated and gender equality and reproductive health were promoted,” the tweet read, citing a report from state-run newspaper China Daily.
At a regular briefing in Beijing on Thursday, a Chinese Foreign Ministry spokesperson defended the embassy’s actions.
“China is … a major victim. There are many false and ugly [pieces of] information about China on Xinjiang-related issues. Of course, the Chinese Embassy in the US has responsibilities and obligations to clarify the facts and explain the truth,” Hua Chunying argued, hitting back at Twitter’s “restrictive measures.”
“We hope Twitter can uphold the principle of objectivity and impartiality, not to show double standards on this issue, but to strengthen screening, and identify what is false information, what are rumors and lies, and what is fact and truth.”
China’s far western Xinjiang region has long been associated with reports of the forced sterilization of people from the Uyghur minority, a predominantly Muslim ethnic group residing in the area. Chinese officials have denied the allegations.
The United States has officially determined that China is committing genocide and crimes against humanity against Uyghur Muslims and ethnic and religious minority groups who live in Xinjiang.
“This genocide is ongoing, and… we are witnessing the systematic attempt to destroy Uyghurs by the Chinese party-state,” former US Secretary of State Mike Pompeo said in a statement Tuesday, on the last full day of the Trump administration.
News of the Twitter restriction was first reported by Bloomberg.
A Twitter spokesperson said that the tweet had violated the company’s content policy, which prohibits “the dehumanization of a group of people based on their religion, caste, age, disability, serious disease, national origin, race, or ethnicity.”
The tweet is now “no longer available” on the platform.
The embassy’s account, meanwhile, will remain locked until the Tweet is deleted, according to Twitter. In similar cases — including one involving former President Donald Trump’s account — Twitter has required the user to manually delete the post in question before regaining the ability to post.
The Chinese embassy, for its part, has not tweeted since January 9.
It is not clear whether the embassy intends to delete the post to restore its account. The delegation in Washington did not immediately respond to a request for comment outside regular US business hours.
Twitter and other social media companies have been grappling with the consequences of how their platforms can sometimes be used to spread incendiary speech. Such concerns led several platforms to ban Trump outright earlier this month after he incited a riot at the US Capitol.
In December, the European Commission proposed vast new oversight and transparency laws for social media. The proposed law would even require the platforms to disclose their algorithms for advertising and recommended content.
US law shields social media companies from responsibility over what is posted on their platforms. Lawmakers from both parties agree the law needs to change; they just don’t agree on how.
“I hope that there will not be some kind of overreach in measures adopted that will silence speech or take the wrong approach,” said Cindy Cohn, the executive director of the Electronic Frontier Foundation, a non-profit that defends online civil liberties, referring to global efforts to regulate the space.
Twitter is one of several US-based social media platforms that are blocked in China, along with Facebook (FB) and Instagram. Despite this, Chinese diplomats and agencies have increasingly been using Twitter to promote Beijing’s interests around the world.
— Brian Fung, Scott McLean and CNN’s Beijing bureau contributed to this report.