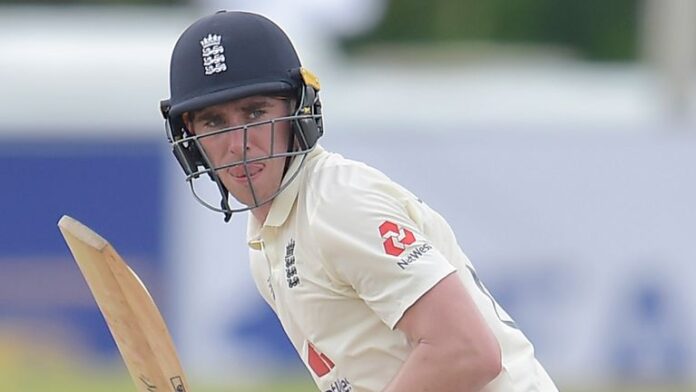 Dan Lawrence says he will endeavour to maximise every England opportunity he gets to crank up the competition within the Test squad.

Lawrence, 23, contributed eye-catching knocks of 73 and 21no to England’s seven-wicket win in the first Test against Sri Lanka, impressing on debut in the absence of opener Rory Burns, batsman Ollie Pope and all-rounder Ben Stokes who are back for the upcoming series in India.

The Essex batsman will win a second cap when the second Test gets underway on Friday and told The Hussain and Key Cricket Show he is trying to “enjoy every minute”.

“My main focus is trying to score big runs in this Test match coming up and keep my name in the hat,” he said. “Every time I’ve looked too far ahead I’ve sometimes forgot what’s in front of me so I’ve just got to focus on the week ahead and see what happens in the next month or so.

“If you looked a couple of years ago, if you were a red-ball batter in England you’d be in with half of a sniff of playing, so it’s lovely having competition. I’m just looking to take every opportunity I get and if those boys [Stokes, Burns, Pope] come back and take my place then I understand and if not, then great.”

Reflecting on his debut knock, which featured six fours and one maximum off 150 balls, Lawrence admitted that he didn’t feel as nervous as he thought he might – perhaps due to the match being played behind closed doors.

“I definitely think there’s an element of that to it,” he explained. “I also think – I’m only 23 and I know I’m playing my first Test but I feel like I’ve actually played quite a lot of first-class cricket now so I feel like I’ve got a pretty good understanding of my game and how to deal with certain situations.

“It definitely is different but it was a lovely way to be blooded in this week. I was lucky to have Silvers [head coach Chris Silverwood] and Foz [James Foster] here – two Essex boys here, who have seen me all the way. They kept me very calm throughout.”

While Lawrence did admit that he “had a little wobbly period through the 60s where I was actually thinking about my celebration” should he score a maiden hundred, mainly he was happy with how he set his innings up.

“Mainly [I like] being very sharp on my feet, whether I’m going straight back or really far forward. I get annoyed with myself when I get caught in between and then I just have to use my hands to get out of jail. That’s when I get frustrated.

“I’m just always looking to score and batting with someone like Rooty made things a lot easier because he’s always ticking the board over for you, so it allows you to chew up a few more balls than it actually looks like.”

His innings included one magnificent six, when he launched spinner Lasith Embuldeniya over midwicket and held the pose for the cameras.

“To be honest I don’t really know where that slog-sweep came from – it was a bit of a ‘see it up’ and I just went with it,” he said.

“I hit it out of the middle of the bat and I thought ‘I might as well carry on with this’! You’ve got to enjoy it and show a little bit! I’ll generally stay on the more aggressive side of things and trust everything else.”

Lawrence’s rise to Test cricket comes after a change in his set-up that now sees him stand very still at the crease in contrast to the back-and-across movement he previously made when preparing to face the seamers.

He explained how the switch came about.

“I played a game at Edgbaston on the world’s flattest wicket in a four-day game and I just felt horrendous,” he admitted.

“I was getting half-volleys and missing out all the time, my head was going too far, I wasn’t even watching the ball – I was just thinking about when to move and how to move. It got to a point where I thought ‘I’m going to completely scrap this off and stand still and see how it goes’.

“It actually felt pretty good from ball one. I changed it mid-game but luckily I didn’t bat in the second innings. We played Surrey the week after and I managed to get a hundred with it and I’ve just stuck with it since then.

“It’s obviously tough because my head sometimes wants to move but I’ve hit enough balls doing it now so it feels like second nature. It’s the key principles of batting – so long as your head is in the right place, I feel like you can’t really go too wrong from there. Thankfully it’s been quite a good change so far.”

Watch day one of the second Test between Sri Lanka and England live on Sky Sports Cricket from 4am on Friday, with over-by-over commentary and in-play video clips on Sky Sports’ digital platforms.