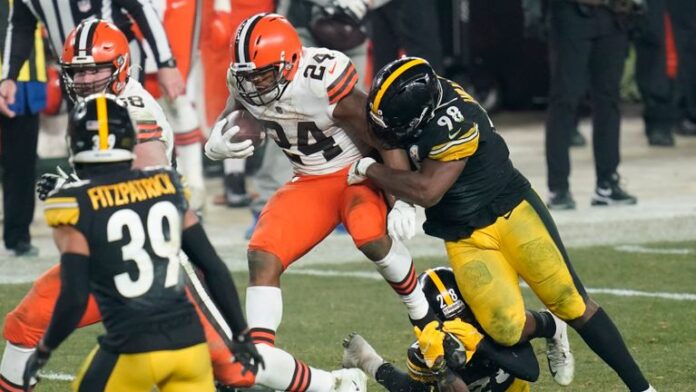 Haskins, a first-round draft pick in 2019, was released by the Washington Football Team on December 28. He reportedly also met with the Carolina Panthers earlier this month.

Steelers quarterback Ben Roethlisberger threw for 3,803 yards with 33 touchdowns and 10 interceptions in 15 games this season.

Roethlisberger turns 39 on March 2 and has said that he hasn’t made a decision about his future following Pittsburgh’s 48-37 loss to the Cleveland Browns in the AFC Wild Card game on January 10. Roethlisberger threw for 501 yards with four touchdowns and four interceptions in that game.

Backup quarterback Mason Rudolph remains under contract, while fellow QB Josh Dobbs is set for free agency. Devlin ‘Duck’ Hodges bid a public farewell over Twitter on Tuesday after his contract with the Steelers had expired.

Haskins’ release last month came after he posted a 3-10 record as a starter in Washington and followed on from an unmasked trip to a nightclub – a violation of the league’s COVID-19 protocol. In the wake of that incident, the team fined him $40,000 and he was stripped of his captaincy.