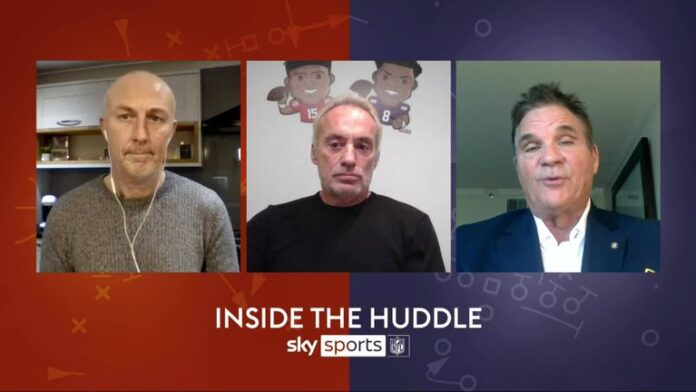 Jeff Reinebold: “How can you justify that a guy like Eric Bieniemy – the offensive coordinator for a Super Bowl champion, a team that has been dynamic on offense – not get one of these jobs? The problem is not with the league, the problem is with the owners”

Sky Sports NFL expert Jeff Reinebold has described the lack of diversity at the head coaching position in the NFL as a “drastic problem”, placing the blame with team owners for not giving greater opportunities to minority candidates.

Out of the 32 teams, there are currently two Black head coaches in the NFL, Brian Flores with the Miami Dolphins and Mike Tomlin with the Pittsburgh Steelers, there is one Hispanic head coach in Ron Rivera of the Washington Football Team, and Robert Saleh became the first-ever Muslim head coach in the league with his hiring by the New York Jets this week.

The Jets opening was one of seven head-coaching vacancies following the conclusion of the 2020 regular season, and of those seven only the Houston Texans’ remains unfilled, with none of the other jobs taken by an ethnic minority candidate.

In 2003, the NFL introduced the ‘Rooney Rule’, which requires teams to interview ethnic-minority candidates for head coaching and senior football operation jobs. Last year, in an effort to create further opportunities, the league approved a proposal which incentivises the development of minority coaches and executives, with teams rewarded with draft picks if another team hires a member of their staff to a higher role.

“They’ve gone through this for years,” Reinebold said on the latest Inside The Huddle – which you can listen to as a podcast in the player below. “Let’s cut through the nonsense, who makes the hires? The reality of it is, it’s on the owners.

“I don’t know how the league can do any more? They’ve tried to incentivise it; ‘if you hire an African-American head coach, you get additional draft picks’.

“Shaun [Gayle] and I were talking about this the other day and he was of the mindset that you ought to fine them if they don’t – that they lose draft picks. That shows, to me, how drastic this problem is.

“I’m not here to throw shade at anybody, but Brandon Staley [hired by the Los Angeles Chargers] was a coordinator in Division III NCAA five years ago – the lowest level of college football.

“Does he deserve the job? I can’t say he doesn’t, because I didn’t sit in on the interview. And did he have the No 1 defense with the [Los Angeles] Rams? Yes. But how can you justify that a guy like Eric Bieniemy, for example – the offensive coordinator for a Super Bowl champion [Kansas City Chiefs], a team that has been dynamic on offense – not get one of these jobs?

Bieniemy himself – preparing for the Chiefs’ AFC Championship clash with the Buffalo Bills on Sunday – spoke to Sky Sports News‘ Richard Graves on Thursday, affirming his ambition to become a head coach in the league.

“It’s always good to be mentioned and having the opportunity to fulfil your dreams,” he said. “Yes, I do want to be a head coach but, when it’s all said and done, my job is to make sure I’m not taking away from the goals we’re trying to accomplish.”

All I will say now is this, based on the calls I am getting: I have never heard the phrase “Sham process,” used more than it has in the past hour.

The Fritz Pollard Alliance, a membership organisation committed to equal opportunity in the NFL, has meanwhile expressed its disappointment in the results of the latest hiring cycle.

Executive director Rod Graves said in a statement: “There are many outstanding Black men and other men and women of color in the NFL. The pipeline is as strong as it has ever been.

“The issue is not in the sufficiency of numbers; the problem is in the limited number of leadership opportunities given.

“The disparity in opportunities is mind-boggling.”

In the NFL, people of colour represent 69 per cent of players and 35 per cent of assistant coaches and, adding his thoughts on the matter, former offensive lineman Brian Baldinger told Inside The Huddle that having more people of colour in coordinator positions might help address the issue of equality at head coach and general manager level.

“It’s disappointing, to be honest with you,” Baldinger said. “What needs to happen is, we need to get the Black assistant coaches into the coordinator roles, where they are much more visible than maybe what they are right now.

“Leslie Frazier, Duce Staley, there’s a bunch of guys out there. They’re leaders of men. That’s what you’re looking for.

Washington make history by promoting King; Mayhew to be GM

Jennifer King has been promoted to an offensive assistant by the Washington Football Team, making her the first Black female full-time coach in NFL history.

King’s move up the coaching ladder was reported by NFL Network. She spent the 2020 season as a coaching intern in Washington, predominantly working alongside running backs coach Randy Jordan.

She also made history earlier this month, alongside Tampa Bay Buccaneers assistant defensive line coach Lori Locust and assistant strength and conditioning coach Maral Javadifar, when they became the first female coaches to occupy opposing sidelines in the playoffs.

It means that Washington, who also made history in August 2020 when they named former running back Jason Wright as the league’s first Black team president, become the first team in the NFL to have a Black general manager and president.