Home World One small step for man, one giant leap for haggis 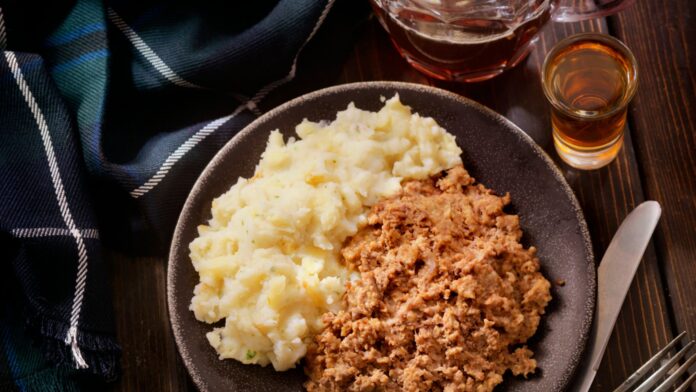 In honour of Burns Night, a packet of haggis has been launched to the edge of space for the first time.

Scottish butcher Simon Howie worked with space education and research firm Stratonauts to launch the 454g haggis in Perth and Kinross this month.

The haggis was attached to a weather balloon and soared more than 20 miles (107,293ft) above the Earth – equivalent to nearly four times the height of Everest.

After taking off from the Simon Howie headquarters in Dunning, it travelled over Stirling, Falkirk, Edinburgh and the Pentland Hills before landing safely in Lauder in the Borders.

Mr Howie said he wanted to start the year by “lifting the spirits of the general public” and was thrilled to work with Stratonauts “to take Scotland’s national dish to new heights”.

“Burns Night is one of the most important dates on the food calendar for us and we wanted to mark the occasion by sending the UK’s best-selling haggis, the original 454g, to the edge of space,” he said.

Mr Howie said his company had worked hard to increase production in the run-up to Christmas and now Burns Night, which Scots celebrate on 25 January to mark the life and works of poet Robert Burns.

With lockdown still in force, Mr Howie said he hoped the unusual stunt “gives everyone some much needed cheer”.

The Scottish delicacy was flying for two hours, 37 minutes, and covered a distance of 52 miles. It has now been safely transported back to company HQ, where it will be preserved for years to come as the “first haggis in space”.

Mr Howie said it is hoped the mission sparks intergalactic and scientific interest in young people.

Once the current COVID restrictions are lifted, the company plans to run workshops in partnership with Stratonauts in local primary schools to encourage more pupils into science, technology, engineering and maths-related careers.

Lewis Campbell, Stratonauts director, said: “Launching from Dunning was challenging due to the winds as we needed to ensure a safe retrieval of the footage and of course the ‘space haggis’ itself.

“Having monitored the weather for weeks, a window of opportunity finally presented itself – and what a window it turned out to be. Perfect conditions.

“After reaching over 107,000ft with views of at least 250 miles, the haggis then fell to Earth at nearly 200mph before the parachute took over – meaning it is also probably the fastest haggis in the world too.”