Home Sport Brown ruled out of Bucs-Packers on Sunday 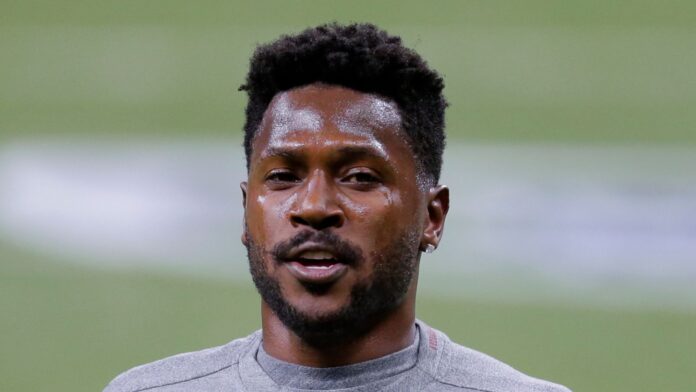 Brown played just 29 snaps in Sunday’s divisional playoff win over the New Orleans Saints; he caught one pass for 10 yards and was targeted three times; he signed with Tampa Bay on October 27 and caught 45 passes for 483 yards and four scores in eight games in the regular season.

Brown played just 29 snaps in Sunday’s divisional playoff win over the New Orleans Saints. He caught one pass for 10 yards and was targeted three times.

Brown, 32, was limited to 33 snaps in the wild-card victory against Washington, catching two passes for 49 yards and a touchdown.

The seven-time Pro Bowl selection and four-time All-Pro signed with Tampa Bay on October 27 and caught 45 passes for 483 yards and four scores in eight games in the regular season.

“This is the GOAT versus the BOAT,” as Good Morning Football‘s Kyle Brandt so fittingly advertised it when the two met earlier this season. It’s a statement that demands debate, but one with substance.

Tom Brady owns the six Super Bowl rings from his nine appearances in total, and Aaron Rodgers has the highest passer rating in NFL history. The greatest of all time versus the best of all time? You decide.

On Sunday the pair will face off for just the fourth time in their careers – and for the first time in the playoffs – as Rodgers’ Green Bay Packers host Brady’s Tampa Bay Buccaneers in the NFC Championship game at Lambeau Field.

The Patrick Mahomes, Josh Allens, Lamar Jacksons and Deshaun Watsons may be the trendy new kids on the block, but the two glistening old-timers embody everything they aspire to be, from dynasty dominance to, perhaps, the most gifted quarterback the game has seen.

Who are the NFL’s final four at QB?

The NFL’s final four heading into Championship Sunday is certainly not lacking in headlines, particularly at the quarterback position.

At the ‘semi-final’ stage of the NFL season, we have the defending-champion Kansas City Chiefs taking on the Buffalo Bills, who go in search of a first-ever title, while there’s also a meeting between the Tampa Bay Buccaneers and Green Bay Packers and their future Hall of Fame QBs.

Tom Brady (Buccaneers) has won a record six Super Bowl rings already, while Rodgers (Packers) goes in search of a second to cement his legacy as one of the all-time greats. As for the other matchup, there are concerns over the availability of reigning Super Bowl MVP Patrick Mahomes after he suffered from concussion in the Chiefs’ win last weekend.