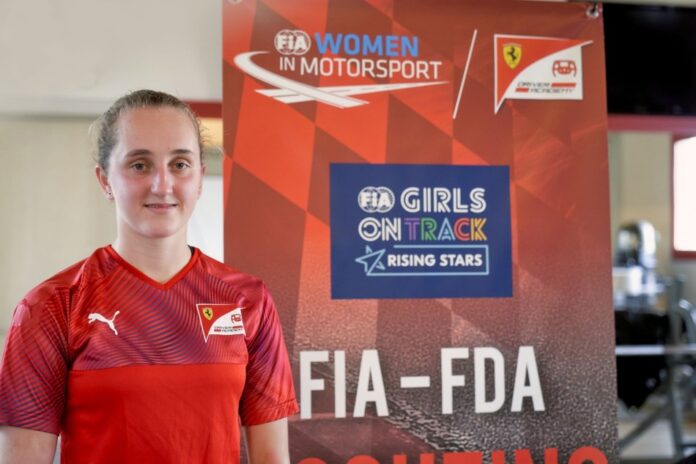 Maya Weug, the Dutch/Belgian driver born in Spain, has made history not only by becoming the first FIA Girls on Track – Rising Stars driver to join the Ferrari Driver Academy, but the first-ever female to do so.

Nearly a year since the initial launch of the FIA Girls on Track – Rising Stars programme, and after months of intense preparation, training, scrutiny and pressure, Maya Weug has been selected to become the first-ever female student of the world-famous Ferrari Driver Academy.

16-year-old Maya will now embark on the most significant journey in her young racing career with a one-year contract at the Academy and a full season in a Formula 4 championship certified by the FIA.

An emotional and elated Maya said: “I literally have no words to express my feelings right now. It’s been my dream for so long, since I started karting; being with Ferrari is amazing. And now, actually winning is just unreal and I’m super happy and thankful to the whole Ferrari Driver Academy and FIA for all their hard work, thank you very much. It’s been an amazing experience, I’ve learned a lot but definitely COVID made it difficult to travel and to be there on time. But also the other girls have made it very tough to be here right now and it’s been amazing; I’m lost for words still! It’s my first season in F4 so I’m looking to improve myself every single race and it’s a huge honour to be with the Ferrari Driver Academy and to represent them and FIA Women in Motorsport. I’m going to make them proud and give everything I have and I’m going to aim for a top position, of course. You can’t imagine how proudly I will wear this red T-shirt with the logo, it’s amazing and I’ll make them all proud, I’m sure.”

“My warmest congratulations to the Dutch/Belgian driver Maya Weug,” said Jean Todt, President of the FIA. “At just 16 years old she has already had a lot of success in national and international karting. Becoming a member of the Ferrari Driver Academy and taking this step up to Formula 4 is the next important stage in her career. I also congratulate the other three finalists for reaching the final selection. The FIA Girls on Track – Rising Stars programme is key to our commitment to supporting gender equality in our sport. I would like to thank the Ferrari Driver Academy and all our partners who have joined us in embracing such an innovative and positive initiative.”

The announcement of Maya’s contract with the Ferrari Driver Academy comes after the final demanding week of off-track assessments, workshops and training, which then culminated in two days of Formula 4 track time on the Fiorano circuit (January 14-15). This once-in-a-lifetime opportunity to be immersed in the Ferrari Driver Academy – which has nurtured the careers of a number of Formula One drivers – provided the four youngsters with invaluable data and feedback from the Academy experts as they strive to pursue a professional career in the sport.

“This is an emotional and historic moment for the FIA Women in Motorsport Commission and I am incredibly proud to witness the first edition of the Girls on Track – Rising Stars reach fruition,” said Michèle Mouton, President of the Commission. “Maya is very deserving of her place in the Ferrari Driver Academy and I am sure she will demonstrate even more of the talent and determination to succeed she has shown us throughout the whole selection, training and assessment process. That she is the first female student at the Academy, detected through our programme, is quite an overwhelming feeling.

“My many congratulations also go to Doriane Pin, Antonella Bassani and Julia Ayoub who have also shown real talent, potential and motivation over the past months, and my sincere thanks go to all our partners who have supported us in what I hope will be the first of many such programmes. This initiative is the pinnacle of our various Girls on Track activities and delivers concrete contractual support to a young female racer; I am really looking forward to following Maya’s journey through the Ferrari Driver Academy and this forthcoming Formula 4 season.”

Scuderia Ferrari Team Principal, Mattia Binotto, said: “This is an important moment in the history of Scuderia Ferrari and its Academy, the FDA, set up in 2019 to shape the drivers of the future for our Formula 1 team. Now, thanks to the partnership with the FIA and its Women in Motorsport Commission in the “Girls on Track – Rising Stars” programme, for the first time, a female driver will join the Ferrari Driver Academy. She is Maya Weug and over the course of this year, she will progress along with us and also take part in one of the “F4 Championship – Certified by FIA” series, the category seen as the first step in single-seaters on the road to Formula 1. Maya’s arrival is a clear indication of the Scuderia’s commitment to making motorsport increasingly inclusive, in line with the hashtag supported by the entire Formula 1 community, #weraceasone.”

For the other three finalists – Doriane, Antonella and Julia – Ferrari has awarded each a test session in its Ferrari 488 Challenge EVO, the GT racing car eligible for the most renowned single-marque championship, the Ferrari Challenge.

The FIA Girls on Track – Rising Stars is a four-year programme and, as such, 2021 will also host a second call for talent among the FIA’s ASNs and the same process will result in a second female driver potentially becoming part of the Ferrari Driver Academy in 2022.

You can find the best photos of the FIA Girls on Track – Rising Stars Scouting Camp: here.