Home Lifestyle #WearTheBern: Team Sanders Get In on the Memes With a Brand New... 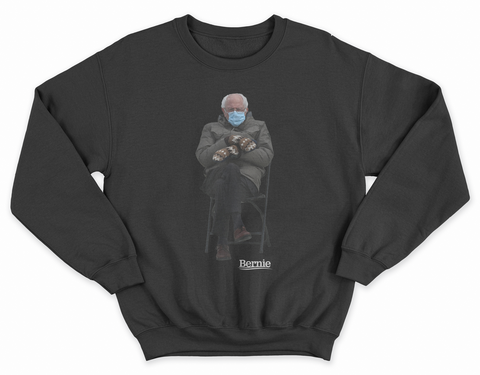 The most enduring from an Inauguration Day chock full of memorable fashion moments wasn’t Joe Biden wearing Ralph Lauren. It wasn’t a slew of first family-adjacent cool kids in swanky designer duds. It wasn’t even Nikolas Ajagu in a pair of really rare Dior x Jordan 1s. No, it was a grumpy junior senator from Vermont posted up on the dais in his signature Burton jacket, once again providing a week’s worth of internet fodder in the process.

If you’re a fan of the senator and/or the many, many memes he inspires, today’s your lucky day. Because Team Sanders is officially getting in on the action, dropping a fleece crewneck sweatshirt with 100% of the proceeds going to support Meals on Wheels in Vermont. The made-in-the-USA crew features—what else?—the now-iconic of Sanders, arms crossed, looking for all the world like a sullen teenager forced by his parents to attend a sibling’s school play he definitely doesn’t want to be at. It already sold out once, but if you’re still jonesing to get in on the joke, there’s currently a pre-order situation happening for round two (you’ll get your sweatshirt three to six weeks after you place your order). And if you’re really can’t wait, there’s a ton of not-so-official meme-inspired merch available on sites like Etsy.

I’d like to imagine Bernie is closely monitoring the sell-through rate of his merchandise like he’s the proprietor of some fledgling streetwear label trying to cash in on a recent bout of much-needed exposure. More likely, though, the dude is thoroughly bewildered over what all his extremely online constituents are snickering about. (Oh, to be a staffer letting the good senator know there’s now a six week wait time for a sweatshirt he had no idea existed. What! Six weeks? For a schmatte?!)

The devil works hard, but the Merchandise Industrial Complex works harder. Nothing but respect for MY senator.

Get Style News and Advice, Every Day

Apple Card: Get a new Apple Card and get 6% cash back on Apple purchases in March

Suitsupply’s New Campaign Is Grossing People Out. The Brand Says It’s Just About ‘Getting Close’ Again.