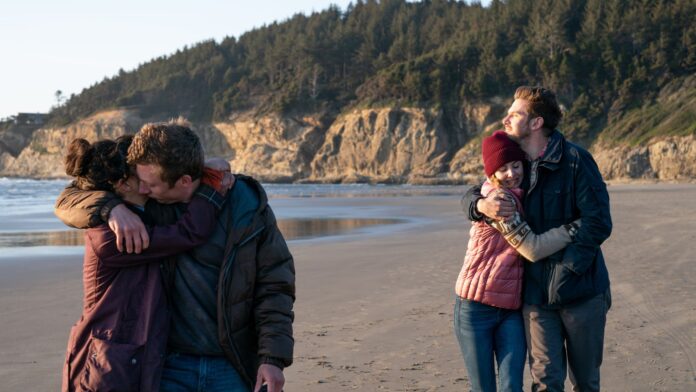 There is no rhyme or reason to the kind of roles actor Dan Stevens chooses, just as long as he remains challenged by the experience.

Following his breakthrough role as Matthew Crawley on the worldwide phenomenon that is Downtown Abbey, Stevens has taken on the big budget live action adaptation of the Beast in Disney’s Beauty And The Beast and played a homicidal war veteran in the cult film The Guest.

In 2020 alone he starred alongside Harrison Ford in the adventure film The Call Of The Wild and showcased his version of blue steel as Alexander Lemtov in the comedy Eurovision Song Contest: The Story Of Fire Saga.

Now in early 2021, he has two very contrasting lead roles hitting the screens in the breezy take on Noel Coward’s 1941 classic Blithe Spirit and a vacation gone creepily wrong with The Rental.

“I don’t necessarily want to show up and be like, ‘Hey, it’s me again.’ Actually, disappearing into these roles and finding something totally different by challenging myself and surprising other people is all part of it as well.”

In The Rental, Stevens takes on the role of Charlie, a successful entrepreneur who books a weekend getaway with his wife (Alison Brie), his brother (Jeremy Allen White) and his sibling’s girlfriend (Sheila Vand) – who also happens to be Charlie’s business partner.

The two couples find themselves in an isolated cliffside mansion, but quickly discover the space brings up multiple tensions within the group and may not have been the ideal choice for a weekend away.

Directed by actor turned director Dave Franco (who’s also the younger brother of actor James Franco), it’s a bold choice for the novice filmmaker to opt for horror for his debut movie.

But it’s a decision that’s paid off – The Rental was number one in the US box office for two weeks during its release.

Stevens explains: “I thought it was particularly interesting that [Dave] wasn’t going for a comedy, as that is what he’s known for.

“But he’s steeped in genre cinema too. A lot of filmmakers take genre as their first move, because there’s a fixed set of rules that you get to play with, and you can learn which ones you can stick with and which ones you can break and will entertain your audience.

“He’s very clever at lacing an unsettling atmosphere that kind of goes underneath it so you don’t know if it’s going to be a drama between two brothers, or a relationship drama, or there’s these racial microaggressions against Sheila’s character. It’s all of these things.”

And despite enjoying his time playing in a horror film, Stevens also has fond memories of a much more light-hearted shoot for Sky Cinema’s Blithe Spirit.

Co-staring Isla Fisher, Leslie Mann and Judi Dench, Edward Hall’s reimagining of the Noel Coward classic revolves around three women who help – and hinder – a screenwriter with a bad case of writer’s block.

Originally performed in the West End as World War II raged outside, the current film adaptation takes on a supernatural tone in which Stevens has to work against the three comedic powerhouses.

He admits: “It was quite a vortex. What was really interesting with [Blithe Spirit] was trying to actively blend a classic feel with modern comedic sensibility. I think we’ve come up with a really nice bright funny adaptation.”

When asked if national treasure Dame Judi Dench would let her hair down during down time on set and swear like a sailor, Stevens teases, “Only when she’s talking about the film Cats.”

So, after such a successful year on screen, has the 38-year-old performer got any aspirations to try his hand behind the camera?

“I can’t imagine that happening. There’s a couple of things brewing, but I think it will be a smaller scale, possibly with a genre slant. It’s a playful way to introduce yourself into that world.”

The Rental is streaming now on Amazon Prime and Blithe Spirit is available on Sky Cinema and NOW TV.