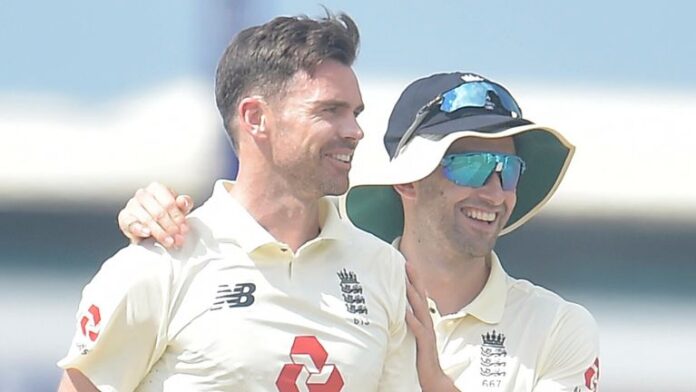 Joe Root finished day two unbeaten on 67 as England closed on 98-2, trailing by 283, in the second Test; James Anderson took 6-40 as Sri Lanka bowled out for 381; watch day three from 4.25am, Sunday on Sky Sports Cricket

James Anderson turned the 30th five-wicket haul of his Test career into a six-for on day two of England’s second Test in Sri Lanka.

England’s leading wicket-taker finished with figures of 6-40 as Sri Lanka were bowled out for 381 at the end of an extended afternoon session before a sparkling unbeaten 67 from Joe Root took the tourists, having slipped to 5-2, to 98-2 at the close in Galle.

Earlier, Niroshan Dickwella fell eight short of a maiden Test century and was among Anderson’s victims, while Dilruwan Perera (67) was the last man out having also made a valuable half-century for the hosts.

All 10 Sri Lankan wickets fell to seamers, the first time that has happened in a Test on the island since 1994, but spin soon came into the equation as left-armer Lasith Embuldeniya accounted for both England openers for the third time in as many innings in the series.

Root and Bairstow steadied the tourists and the captain was quickly looking as impressive as he did in making his double century in the first Test, bringing up his 50th Test fifty from just 65 balls to take his side safely through to stumps.

The morning followed a similar pattern to that on day one as England struck early before Sri Lanka fought back as the session went on.

Anderson accounted for Angelo Mathews (110) with the last ball of his first over, Sri Lanka’s centurion adding just three to his overnight total before he was given out caught behind following an England review.

The appeal was unconvincing as Anderson nipped the ball back to Mathews and the ball passed close to the bat before flicking the pad on the way through to Jos Buttler behind the stumps. Root called for the review though and UltraEdge showed a faint inside edge.

Debutant Ramesh Mendis came and went without scoring, albeit he could count himself a little unfortunate as he glanced the ball down leg off Mark Wood, only to see Buttler dive to his left and take a brilliant one-handed catch.

Dickwella was batting well though, showing the temperament that has often been lacking to match his undoubted talent, and eased to a 16th Test fifty.

Dilruwan Perera, who held England up for a spell in the first Test, was proving a useful partner, defending solidly before occasionally springing into action to thump the visitors’ toiling spinners over the top.

The pair had added 70 by lunch and Dickwella, with a previous best of 83, moved to his highest Test score two overs into the afternoon.

The left-hander moved into the 90s and was playing with such confidence, a number of drives through the offside particularly eye-catching, that three figures looked assured.

However, he fell eight agonising runs short as Anderson again found the breakthrough for England, tempting Dickwella with a wider off-cutter to bring two catchers just in front of square into play. The batsman avoided them but could not get the ball past Jack Leach at wide mid-off.

That wicket gave the 38-year-old the dubious honour of being the oldest pace bowler to take a five-for in Asia and two balls later, five became six as Suranga Lakmal fenced one to Zak Crawley, close in at gully.

Left with just the tail for company, Dilruwan went on the offensive and launched Leach back down the ground for six on his way to his seventh Test fifty.

Embuldeniya (7) stayed with him for 12 overs until edging to Root at first slip to give Wood (3-84) his third wicket but it was another frustrating seven overs before they were able to wrap up the innings, Dilruwan eventually holing out to give Sam Curran (1-60) his first wicket.

Tea was taken, having been delayed as Root’s men tried to finish things off, but the break was of little use to Dom Sibley and Zak Crawley.

After four maidens to start the innings, a Crawley boundary got England away but Embuldeniya trapped Sibley lbw with a ball that skidded on in the next over and swiftly added the wicket of Crawley, caught at slip after prodding forward to a turning delivery.

England’s openers in the series so far against Embuldeniya: 8 runs off 55 balls with 6 dismissals

Neither opener has reached double figures in the series, meaning Root was again in early to join Bairstow with the job of rebuilding.

The England captain was able to rotate strike well against Embuldeniya, using the sweep shots that brought him such success in the series opener to great effect once more, the pressure eased and a fine sweep for four brought up the 50 partnership in quick time.

Bairstow overcame a few early troubles against the off-spin of Dilruwan, which included him surviving a very close lbw review, by turning to the sweep to knock the bowler off his line then, having done so and forced him to go around the wicket, skipping down the track and thumping his down the ground.

Meanwhile, Root was remarkably looking even more impressive than he did in scoring 228 last week, certainly the runs were coming more quickly with 10 boundaries, largely made of up of sweeps and reverse-sweeps, putting the pressure back on the Sri Lanka bowlers.

The third-wicket stand had reached 93 by stumps but England will be asking for plenty more from the two Yorkshiremen on day three as they try to surpass Sri Lanka’s first-innings total.

Watch day three of the second Test between Sri Lanka and England from 4.25am on Sunday on Sky Sports Cricket.