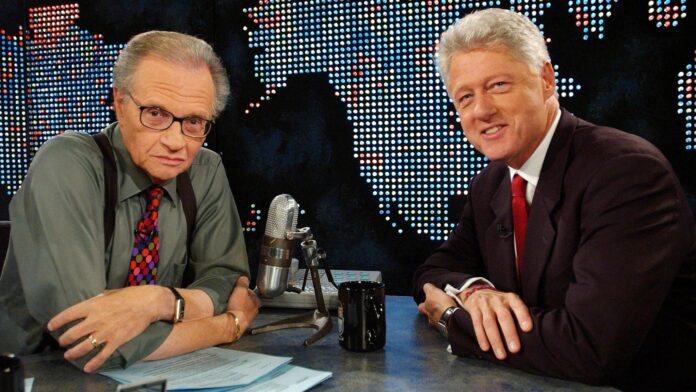 Tributes have poured in for “legendary” US talk show host Larry King, who has died just weeks after contracting COVID-19.

The 87-year-old TV star was taken to hospital in Los Angeles in late December after testing positive for coronavirus – and died at Cedars-Sinai Medical Center.

US talk show host Larry King has died at the age of 87 after testing positive for coronavirus last month.

King, whose career spanned more than six decades and is estimated to have covered more than 50,000 interviews, had Type-2 diabetes and had suffered from lung cancer, angina and heart attacks in recent years.

No cause of death has yet been given.

During his career, King, hunched over his desk in rolled-up sleeves and braces, quizzed thousands of world leaders, politicians and entertainers.

He became known for an interview style that ensured the subjects were the true stars of his programmes, and left himself as merely an unbiased conduit between the guest and audience.

A statement from Ora Media, the studio and network he co-founded, said.”Whether he was interviewing a US president, foreign leader, celebrity, scandal-ridden personage, or an everyman, Larry liked to ask short, direct, and uncomplicated questions.

“He believed concise questions usually provided the best answers, and he was not wrong in that belief.”

“For 63 years and across the platforms of radio, television and digital media, Larry’s many thousands of interviews, awards, and global acclaim stand as a testament to his unique and lasting talent as a broadcaster,” said the statement by Ora Media.

Larry King was a hero of mine until we fell out after I replaced him at CNN & he said my show was ‘like watching your mother-in-law go over a cliff in your new Bentley.’ (He married 8 times so a mother-in-law expert) But he was a brilliant broadcaster & masterful TV interviewer. pic.twitter.com/1JsXeeZYEk

Morgan took over King’s timeslot on CNN when he retired in 2010, and the pair famously fell out after King described the new show as “like watching your mother-in-law go over a cliff in your new Bentley”.

But Morgan added: “He was a brilliant broadcaster & masterful TV interviewer”.

Christiane Amanpour, CNN’s chief international anchor, wrote on Twitter: “Larry King was a giant of broadcasting and a master of the TV celebrity/statesman-woman interview.”

Actress Kirstie Alley described King as “legendary” and added “he was one of the only talk show hosts who let you talk.”

Star Trek actor George Takei said King understood “human triumph and frailty equally well” and added: “There was no one else like you, and you shall be missed.”

King’s broadcasting fame began in the 1970s with his radio programme The Larry King Show, which he hosted on the network Mutual Broadcasting System.

He then went on to have his own television show, Larry King Live on CNN, between 1985 and 2010, where his guests included politicians, celebrities, sports stars and well-known conspiracy theorists.

King married country singer and actress Shawn Southwick in 1997 and the couple filed for divorce in 2010. The filing was then rescinded only for them to divorce again in 2019.

He is survived by his children Larry, Jr, Chance and Cannon.