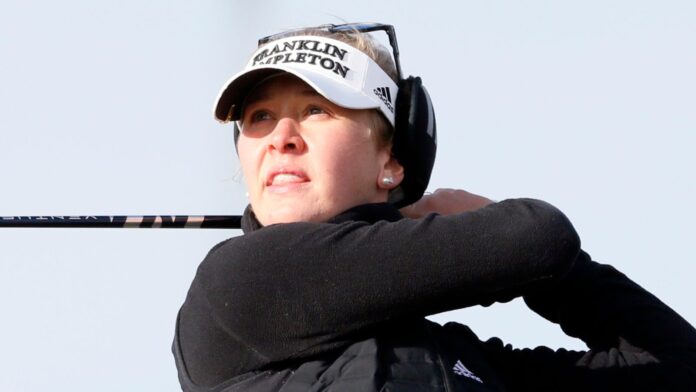 Jessica Korda covers the back nine in a remarkable 28 shots, with seven birdies, an eagle and a par at a par-five! But despite Korda firing 60, she still trails Danielle Kang by three shots in Florida.

Jessica Korda fired a sensational 60 to keep in touch with leader Danielle Kang after the third round of the Diamond Resorts Tournament of Champions in Florida.

Kang was threatening to run away with the tournament as she cruised to the turn in four under, but Korda needed only 28 shots to cover the back nine to get within three of the leader, whose high-quality 63 lifted her to 19 under par after 54 holes.

Korda’s younger sister, Nelly, slipped six off the pace despite carding a 67, while the English duo of Georgia Hall and Mel Reid closed on six under and will be playing for top-10 finishes and extra zeros on their prize cheques come Sunday evening.

Kang led by two shots overnight and birdied the first, but she was overshadowed by Nelly Korda when she began her third round with three consecutive birdies to trim the deficit to a single stroke.

But Kang then birdied three of the next four holes and matched Korda’s birdies at 10 and 11 just as the elder Korda sister was charging into contention.

Jessica Korda opened with a pair of birdies but then reeled off seven straight pars before hitting her straps after the turn, carding seven birdies and an eagle on the 17th, her only par being a disappointment as it was at the par-five 13th.

Her ninth birdie of the day at the last capped an astonishing inward 28 and propelled her into outright second place, although the gap increased to three shots when Kang birdied the 15th and final holes either side of a clutch par-save at 17 following a duffed chip.

“That was the second time I chunked it today,” said Kang, who has completed 54 holes without any blemishes on her scorecards. “I just got a little greedy trying to hit a high shot on a downhill lie, and that’s not the right thing to do.

“I hit the big ball before the little ball. What are you going to do? But I just kind of brushed it off. I wanted to give myself the best par opportunity, and it was really cool to make that par.”

Jessica Korda, who had finished around an hour earlier, was naturally delighted with her career-best round on the LPGA Tour, although there was a tinge of frustration about her par at the 13th.

“It was really fun, but I can’t believe my only par on the back nine was a par five,” she said. “But it was an awesome day. I started off really strong and then mellowed out a little bit. Was trying to get to some tougher pins and just playing it really safe.

“Then on the back nine I don’t know what happened. I just turned it up. I had a lot of great looks and we were just really relaxed all day.

“Honestly, I need to look back at it. It was really incredible. I hit some really good shots and I didn’t have too many long putts. So definitely ball striking obviously helped.”

Korda Jnr will go into the final round six shots off the pace after an untidy finish with bogeys at two of the last four holes, while In Gee Chun jumped into fourth place with three late birdies to match Korda’s 67.

Hall and Reid carded nine birdies between them as both returned 67s to close on six-under par.