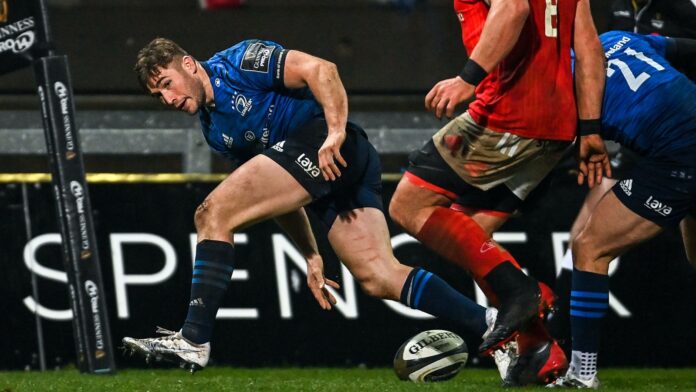 Jordan Larmour’s 69th-minute try ripped the result out of Munster’s grasp as Leinster triumphed 13-10 in a Guinness PRO14 dogfight at Thomond Park.

Well done, lads! A massive performance to grind out the win! 💪🔵#MUNvLEI#GuinnessPRO14 pic.twitter.com/irdXSuSNdg

Table-topping Munster had been the better team up to that point but the defending champions produced a real moment of class to put Larmour over in the right corner.

It was tightly poised at half-time, Tadhg Beirne’s try under the posts giving the hosts a 10-6 lead with fly-halves JJ Hanrahan and Johnny Sexton landing two kicks each.

The second half was scoreless until replacement Ross Byrne’s grubber kick led to Larmour’s decisive try. Byrne’s conversion was enough to seal a smash-and-grab win.

That’s was impressive from Leinster. Second best for most of the game but found a way to get it done. 💪

A number of players, including Beirne, the Guinness player-of-the-match, grasped the opportunity to impress Ireland head coach Andy Farrell ahead of Monday’s Six Nations squad announcement.

Also on Saturday, Edinburgh battled to a 26-10 victory at Zebre in the absence of head coach Richard Cockerill and full-back Blair Kinghorn.

GET IN! Grit, determination and a big time away W!

FT brought to you by @_ScottishBS.#BackYourBurgh ⚪️🟠

The duo, along with a team physiotherapist, were forced to stay in Scotland following a delay in obtaining the results of their coronavirus tests, although all three were later found to be negative.

The Scottish club put that distraction to one side to earn a hard-fought victory in Parma, despite having WP Nel sin-binned and George Taylor red-carded late on.

Mark Bennett put the visitors in control with a try late in the first half while Jaco Van Der Walt contributed 16 points with the boot.

Mick Kearney crossed for Zebre’s only touchdown as the hosts pulled level early in the second period, but Edinburgh survived twice being reduced to 14 men and Jamie Farndale added another try at the death.

On Friday evening, Cardiff Blues interim director of rugby Dai Young celebrated his return to the region after a 10-year absence with a 13-10 win over the Scarlets in Llanelli.

Waking up on Saturday and remembering we completed a double over the Scarlets 💙 pic.twitter.com/HAHM4zfody

The result completed a quickfire double over their host, having beaten them 29-20 at the Cardiff City Stadium only a fortnight ago.

However, Young missed a lot of the action as a serious road traffic accident on the M4 delayed his arrival until midway through the first half.

Blade Thomson responded with a try for Scarlets, while Leigh Halfpenny kicked a penalty and a conversion.