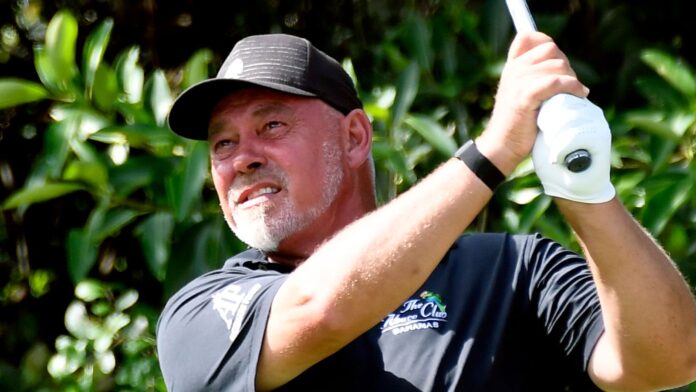 Darren Clarke claims back-to-back wins on the PGA Tour Champions after firing a closing 64, including six birdies on the back nine, to win the Mitsubishi Electric Championship by two shots in Hawaii.

Darren Clarke fired a closing 64 to claim a two-shot victory over Retief Goosen at the Mitsubishi Electric Championship in Hawaii.

Clarke stormed home in just 30 shots at the Hualalai Resort in in Ka’upulehu-Kona as he and Goosen both carded the low rounds of the final day in a thrilling finish to the opening PGA Tour Champions event of 2021.

Goosen applied some early pressure when he followed a birdie at the third with an eagle at the fourth, and another gain at the seventh brought the South African level with Clarke at the turn.

But Clarke began the inward run with four birdies in five holes, and he picked up two more at 16 and 17 before a solid par at the last sealed back-to-back victories on the PGA Tour Champions.

The celebration is most definitely on. 🏆 pic.twitter.com/eEB6FKgFvT

“There’s no unassailable lead because the guys make birdies, you saw that today,” said Clarke, 52, who edged out Jim Furyk and Bernhard Langer at the TimberTech Championship in November.

“That’s just the way it is. You have to play well and you have to stay aggressive, and I was able to do that today. I could see everything Goose was doing, so every time he was making a birdie, I was having to try and follow him, make another birdie right on top of him playing behind him.

“But that’s brilliant, that’s why we play the game. We play for the competition, we play to put ourselves in position that we want to win.

“To get in the winners and to win again is certainly very gratifying. The guys have been so good to me out here since I’ve been out here, so welcoming. And the standard is so high, just it’s incredible.

“The guys really flat-out can play. I’ve been fortunate these past couple of tournaments.”

Jerry Kelly, who shared the overnight lead with Clarke, could not keep up with his playing partner and closed with a 68 to finish four behind the champion in 17 under, with Fred Couples two strokes further back after a 67.