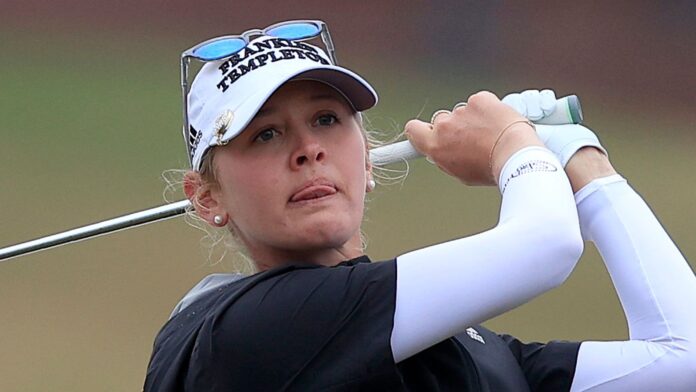 Korda stole the show on Saturday as she covered the back nine in only 28 shots to fire an astonishing 60, and she staged another big finish to her final round to card a 66 and end the tournament level with Kang on 24 under.

The top two returned to the par-three 18th on the Tranquilo course at the Four Seasons Golf and Sports Club near Orlando, and Korda holed a clutch 25-foot putt for birdie which Kang could not match.

Kang had slept on a two-shot lead overnight, and she looked the firm favourite to claim the season opener when she birdied the first and Korda bogeyed the third to leave Kang four clear at the top.

Korda pulled one back at the sixth and both birdied seven before Korda trimmed the deficit to two at the 13th, and both traded birdie twos at the short 14th.

But Kang then picked a bad time to drop her first shot of the tournament at the 15th, and Korda earned a share of the lead for the first time when she rolled in a good putt for a three at 16.

Both took care of the par-five 17th in birdie-fours and headed to the 72nd tee all square, and two solid pars forced the event into extra holes – Kang signing for a 68 and Korda two shots lower.

Kang was closer with the tee shots, but Korda’s superb putt clinched her sixth LPGA Tour title, four of them coming on her season debut.

Korda’s younger sister Nelly was just two behind with five to play after she put together a sparkling run of six birdies in seven holes around the turn, but she could only manage one more birdie coming in.

The younger Korda had to settle for a closing 64 and outright third place on 22 under, with South Korean In Gee Chun a distant fourth – five strokes further behind.

Georgia Hall just missed out on a top-10 finish as she fired a five-birdie 66 to lead the English trio of challengers on 11 under, three better than Bronte Law and four ahead of Mel Reid.