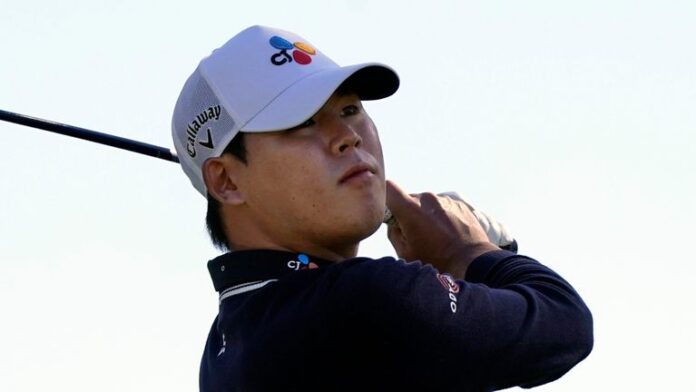 Former Players champion Si Woo Kim held his nerve to birdie two of the last three holes to clinch victory at The American Express ahead of Patrick Cantlay, who made 11 birdies in a stunning, closing 61.

Cantlay made 11 birdies in his closing 61 which posted 22 under par, one ahead of Kim at the time, but the South Korean birdied 16 and 17 and capped an impressive 64 and the victory with a nerveless par at the last.

Cameron Davis also flirted with the lead before running out of steam down the stretch, while Tony Finau made two big mistakes on the back nine and his long quest for a second PGA Tour win continues.

Finau was tied for the lead overnight and looked in control of the tournament early on the final day on the Stadium Course at PGA West, making birdies at the first two holes only to miss three further good chances, including one from four feet at the seventh.

The big-hitting American birdied eight and 10 to stay tied for the lead, but he tugged a bold second to the long 11th into water and, after pitching to two feet, he blocked the par putt and looked aghast as his ball lipped out.

The resulting six followed by another bogey at 14 ended his challenge as Kim and Cantlay duelled for the lead, with Cantlay racing to the turn with five birdies in six holes and picking up further shots at the 11th and 13th.

But Kim was also dialled in and birdied four in five on the front nine before rattling in a pair of confident six-foot birdie putts on 10 and 11, although he then found himself one behind when Cantlay produced a grandstand finish.

The American holed from 20 feet at 15 and a nice pitch-and-putt gave him another at the long 16th, and he then nailed the best of his 11 birdies of the day from close to 40 feet at the last, setting an imposing target for Kim before Cantlay headed to the practice range.

Kim, however, was up to the task, although he rode his luck at the 16th when his second came within inches of rolling into the infamous, deep bunker on the left, and he two-putted for birdie and drilled a solid iron into the heart of the island green at 17.

The 25-year-old read the putt to perfection and holed from 18 feet to regain the outright lead, which he protected with the minimum of fuss thanks to an arrow-straight fairway wood, another pure iron to 20 feet and a routine two-putt for par.

Kim’s third Tour victory was his first since his shock three-shot triumph at The Players Championship in 2017, with Cantlay having to settle for outright second having made 20 birdies over the weekend alone.

Davis matched Cantlay’s outward 30 but could not sustain his challenge after the turn, adding only two more birdies at 11 and 16 as his 64 earned him a podium finish on 20 under, with Finau one further behind.