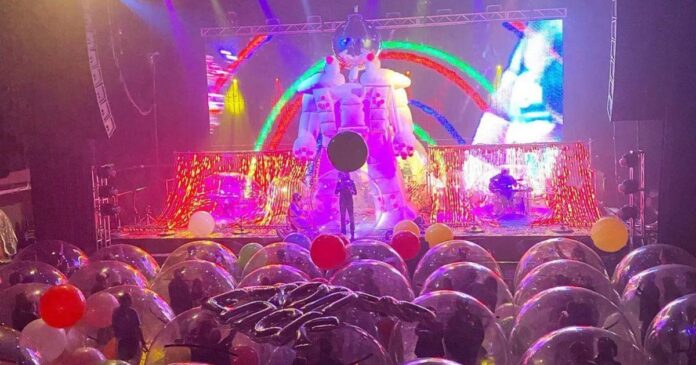 In an age where it seems impossible to safely hold a crowded concert, the Flaming Lips found a way to do so in their home state of Oklahoma. The band put on two shows where attendees — and musicians — stood inside “space bubbles” to prevent the spread of COVID-19.

Flaming Lips frontman Wayne Coyne came up with the idea. Even before the pandemic, Coyne would use an inflatable bubble to stage dive into the crowd.

But when the COVID-19 pandemic hit, he thought of another use for the space bubbles, drawing a cartoon of himself — and his fans — protected by bubbles at a concert.

“I think it was right around St. Patrick’s Day, and so I just [thought of] it at the very first day of quarantine,” Coyne told CBS News in October. “I just did it like isn’t this funny, you know, just as a joke, but part of it wasn’t a joke, you know?”

During an appearance on “The Late Show with Stephen Colbert” in May, The Flaming Lips decided to actually test out Coyne’s idea. The band performed a few songs with about 30 people in individual bubbles during their performance.

“When Stephen’s people wanted us to try that for their show, that gave me a little bit of a gauge that this could be go beyond a joke,” Coyne told CBS News.

After the success of that performance, the band ordered space bubbles from China for an October show at the Criterion theater in Oklahoma City. The first floor of the venue was filled with around 300 fans in enclosed in plastic bubble barriers.

“I’m in my space bubble and [the fans] were excited,” Coyne said about the band’s inventive performance. “To [the audience] it was just simply another concert and the idea that you’re in the space, being in a bubble is great, but being at the concert is so great, and so once that happened, I think it hit us like we’re doing a concert in these bubbles.”

“Once it started to go, you see people excited, people being happy, and people really having fun and it being loud and outrageous,” he continued.

Coyne, his wife Katy Coyne and photographer Nathan Poppe shared images and video of the concert on social media.

The plastic pods keep fans at a safe distance, and Coyne emphasized that each bubble is cleaned out with about 20 ounces of 70% isopropyl alcohol, hit with a leaf blower until the liquid is evaporated, and then scrubbed down by a person in a full painter’s suit and mask. The cleaning process is extensive after each show.

The band was scheduled to do another set of bubble concerts at the Criterion in December, but the shows were postponed due to a spike in coronavirus cases in the state, BBC News reported. The concerts were rescheduled for last Friday and Saturday night, when the venue was again filled with 100 inflatable bubbles, each with up to three people inside.

The bubbles hold enough oxygen for three people to breathe for “over an hour and 10 minutes” before they need to be refreshed with a leaf blower, Coyne said, according to BBC News.  Each bubble has a speaker inside, so the band’s sound wasn’t muffled, as well as a fan, water and a towel to wipe down condensation. If fans needed to leave their bubble, they had an “I gotta go pee/hot in here” sign and a venue staff member would escort them to the bathroom while wearing masks.

Since clapping inside the bubbles sounded muted, people instead applauded by “punching the top of their bubble,” Poppe said.

The fans left the venue by rolling their bubbles to the exit, then putting on masks and unzipping their plastic globe to leave the venue.

Oklahoma has reported 374,853 COVID-19 cases and 3,293 deaths, according to the state health department. The state is currently providing vaccines to health care workers, first responders and residents over 65 years old.

‘ER’ cast will reunite for special ‘Stars In The House’ episode

Britney Spears is ‘flattered’ people care so much

What to look forward to in Super Bowl 50

The Apple spring event is actually happening on April 20 for...