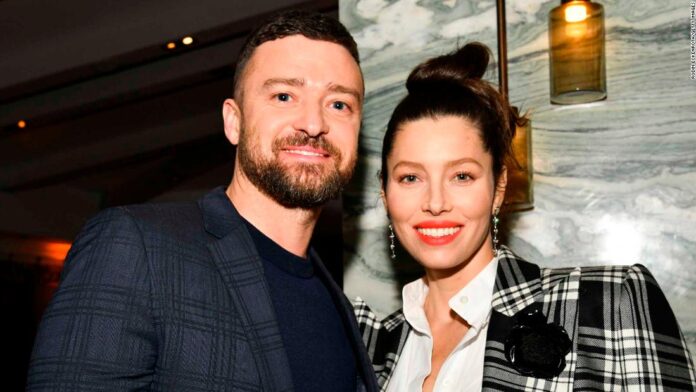 Timberlake, who grew up in Memphis, Tennessee, recently appeared on actor Dax Shepard’s “Armchair Expert” podcast and explained why he and Biel try to limit their children’s exposure to fame.
“I try to be conscious of making sure we can live a life where we’re not weirdly private but we’re conscious of making sure they can be kids for as long as possible,” he said. “And not have the weight of somebody else treating them differently because of something that their parents do.”
The couple, who welcomed their second son last year, rarely post any photos of their eldest son on social media and have yet to post photos of their newest addition.
Timberlake, whose new movie, “Palmer,” is out this week on Apple TV+, talked with Shepard about how they explain fame to their children.
Shepard told a story about how his daughters told their classmates that their mom, Kristen Bell, is Princess Anna from Disney’s “Frozen.” And although she does voice the popular princess, Shepard tried to explain that it might upset the other kids in her class.
“I know you’re proud and you should be able to say that, but I’m just warning you, that’ll probably make other kids jealous and they won’t know how to handle that feeling,” Shepard said.
This was something that resonated with Timberlake, who plays Branch in the “Trolls” franchise.
“For guys like us, you know, the hope is that we just keep instilling in them that we got really fun jobs, but it’s not who we are,” he said. “Hopefully down the road, then that has more weight to it I guess.”