Home Sport Olympic athletes encouraged to get vaccine by IOC 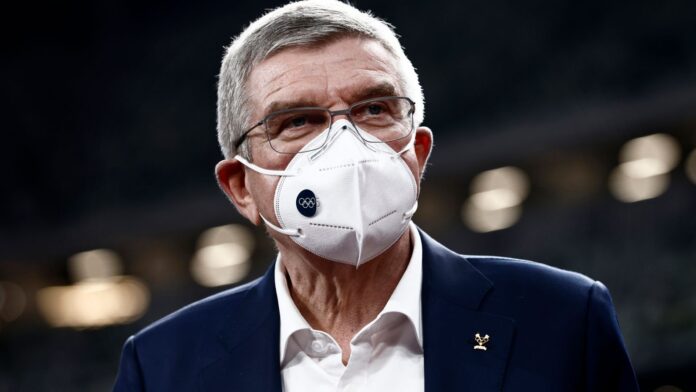 Ahead of the delayed Tokyo 2020 Games, the International Olympic Committee have said vaccinations are part of a “toolbox” they are developing as part of their Covid-19 countermeasures, which also includes immigration procedures, quarantine measures, testing, and PPE

The International Olympic Committee will encourage athletes to get vaccinations for coronavirus ahead of the delayed Tokyo 2020 Games.

However, the IOC has stressed athletes should not be prioritised over vaccinating vulnerable groups, nurses, medical doctors and everyone keeping societies safe.

It follows calls from Dr Michael Ryan, the World Health Organisation’s executive director of the health emergencies programme, who said Olympic athletes should not jump the queue.

Speaking ahead of a press conference on Wednesday, the IOC said vaccinations were part of a “toolbox” they are developing as part of their Covid-19 countermeasures, which also includes immigration procedures, quarantine measures, testing, and PPE.

An IOC statement read: “When vaccination is made available to a broader public, the IOC calls for Olympic and Paralympic teams to be vaccinated given their role as ambassadors of their NOCs and given the role of sport “to promote safe sport as a contributor to the health and wellbeing of individuals and communities”.

“The IOC will work with the NOCs to encourage and assist their athletes, officials and stakeholders to get vaccinated in their home countries, in line with national immunisation guidelines, before they go to Japan.

The NOCs have been asked to engage with their respective governments regarding vaccinations, while Bach has stated they will not be obligatory.

Bach said: “In all these conversations and initiatives, the IOC is guided by four principles: firstly, to organise Olympic Games in a safe environment for everyone. Secondly, vaccination priority should be given to vulnerable groups, nurses, medical doctors and everyone who is keeping our societies safe.

“Thirdly, we encourage all the Olympic and Paralympic participants who are offered vaccination to accept it, also as an act of solidarity with the Japanese hosts and their fellow participants. Fourthly, vaccination will not be obligatory.”

Olympians should not get early vaccine, says WHO

Dr Michael Ryan told a WHO press conference in Geneva: “Right now we are laser-focused on solving our biggest problem which is vaccinating health workers in all countries and allowing people who are vulnerable and dying from this infection to access vaccine.”

He also said: “We face a crisis now on a global scale that requires frontline workers, those older people and those most vulnerable to access vaccines first – that does not in any way negate the desire or the will to have to the Olympics and come together and celebrate a global sporting event where all countries come together.

“What a wonderful symbol those Games are of shared humanity, however we have to face the realities of what we face now – there is not enough vaccine right now to even serve those who are most at risk.”

French National Olympic and Sports Committee (CNOSF) president Denis Masseglia has said athletes who have not been vaccinated would face “extremely difficult” conditions at this summer’s Tokyo Games – which were postponed from last year.

He warned they would face “quarantine of a fortnight” and “will have to undergo tests in the mornings and evenings”.

There is mounting uncertainty over whether the already delayed Olympic and Paralympic Games will go ahead with coronavirus rates growing worldwide and much of the wider Tokyo region having been plunged into a state of emergency earlier this month.

Just days ago, International Olympic Committee president Thomas Bach said he believes the Tokyo 2020 Games will provide the “light at the end of the tunnel” amid the Covid-19 pandemic.

Mr Bach also insisted the event has the “full support” of Japanese officials after a report in The Times claimed the country’s government has “privately concluded” the Olympics and Paralympics will have to be called off due to rising coronavirus rates.

Mr Bach’s remarks come with a growing number of figures, including the former London 2012 chief executive Sir Keith Mills, having expressed doubts over whether the Games will take place, while athletes are calling for clarity.

Japan is yet to begin vaccinating its citizens, although it hopes a majority of adults will have received a jab by July, and says vaccinations will not be compulsory for Games visitors.

Olympic officials have distanced themselves from suggestions by IOC executive committee member Dick Pound athletes might jump the queue in order for the Games to proceed.

A mandatory scheme would face the problem of favouring those nations with established vaccine programmes over others which are unable to access such facilities and programmes.

An increasing number of athletes are going public with their concerns and calling for clarity from the IOC over if and how the Games will take place.

Britain’s four-time Olympic rowing champion Sir Matthew Pinsent has called for the Tokyo Games to be moved back to take the 2024 place in the calendar – an idea which has been dismissed out of hand by officials.

Double Paralympic silver medallist and former world champion Stef Reid insisted the continuing speculation is doing nothing to help athletes in their preparations for the Games.

She tweeted: “This is exhausting. If it is true, make it official.”