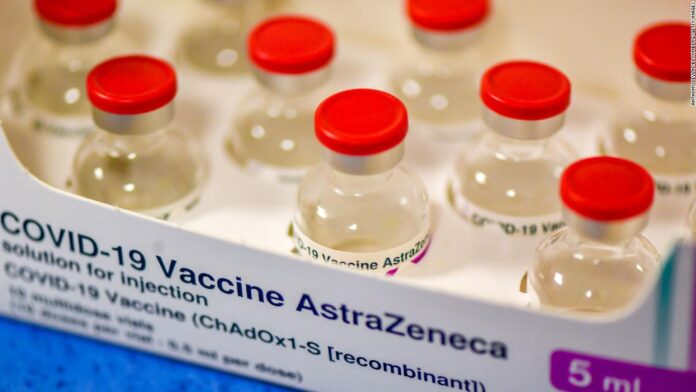 AstraZeneca will not be able to deliver as many doses of its vaccine as promised, according to EU officials, putting government rollout plans and the economic recovery at risk. The news comes after Pfizer said it had delivered fewer doses of its vaccine than expected last week.
EU Health Commissioner Stella Kyriakides on Monday expressed dissatisfaction on talks with AstraZeneca and said conversations would continue. She said the drugmaker “intends to supply considerably fewer doses in the coming weeks than agreed and announced.”
European Commission President Ursula von der Leyen turned up the heat on the pharmaceutical companies on Tuesday, saying the bloc “means business.”
“Europe invested billions to help develop the world’s first Covid-19 vaccines, to create a truly global common good. And now the companies must deliver. They must honor their obligations,” she said during a virtual meeting of the World Economic Forum.
The European Union has devoted part of a €2.7 billion ($3.3 billion) emergency fund to assist with vaccine development. On top of that, it’s spent billions to secure doses, though it declined to provide details on individual contracts.
EU countries counting on the vaccines to rein in the health crisis and jumpstart their economies are now being forced to modify their plans. Italian Deputy Health Minister Pierpaolo Sileri told TV channel Rai 1 on Sunday that people over 80 years old would be vaccinated four weeks later than planned as a result of the delays. The country is threatening legal action against the drugmakers.
“By the [fall] we could vaccinate up to 45 million Italians, but I don’t believe in these companies,” Sileri said. “I want to see the vaccines.”

The European Union has ordered 300 million doses of the AstraZeneca vaccine, which could be approved for use as soon as this week, with an option to purchase an additional 100 million.
The company said that production has been hampered by a manufacturing issue.
“While there is no scheduled delay to the start of shipments of our vaccine should we receive approval in Europe, initial volumes will be lower than originally anticipated due to reduced yields at a manufacturing site within our European supply chain,” AstraZeneca said in a statement. “We will be supplying tens of millions of doses in February and March to the European Union, as we continue to ramp up production volumes.”
The news has sent the bloc reeling, just as it was racing to assess the impact of delays announced by Pfizer. The US company said on Jan. 15 that it would deliver fewer doses than planned last week while it upgraded its manufacturing facility in Puurs, Belgium.
The drugmaker said it would still be able to meet first quarter targets, and as a result of the changes to its Belgium plant would be able to churn out 2 billion doses by the end of 2021. That’s up from the 1.3 billion it had originally estimated.
Pfizer said Monday it would return to its original schedule of deliveries for the European Union this week.
European governments are demanding answers, pointing out that the success of their vaccination efforts is dependent on the private sector.
“On the one hand we can only welcome the result of science, and on the other hand they have a monopoly and we are totally dependent,” Belgian Health Minister Frank Vandenbroucke said on Saturday. “There may be production issues, but these uncertainties and announcements make it very difficult to organize the campaign.”
Kyriakides said on Monday that the bloc would now demand “full transparency concerning the export of vaccines” from the European Union.
“In the future, all companies producing vaccines against Covid-19 in the EU will have to provide early notification whenever they want to export vaccines to third countries. Humanitarian deliveries are of course not affected by this,” she said on Twitter.
German Health Minister Jens Spahn said that the controls were not about putting the “EU first” but about making sure Europe got its fair share.
“In my view it makes sense that we have an export limit, meaning that vaccines which leave the European Union have a license so that we know what is being produced, what is leaving Europe, where it is leaving so that there is a fair distribution,” he told German broadcaster ZDF.

How bad is it?

Supply chain experts are much more concerned by the news from AstraZeneca than Pfizer, given the latter company’s commitment to increase output soon. AstraZeneca’s vaccine, developed with Oxford University, is also much easier to distribute because it can be stored at higher temperatures than the Pfizer alternative.
A delay for a week or two “is not a big problem,” said Burak Kazaz, a professor of supply chain management at Syracuse University. “[Though] I certainly understand that a delay means lives.”
The scope of the problems facing AstraZeneca, which appear more serious, would become clear in the coming weeks, he said.
Delays from both firms are a sign that there are still kinks in the supply chain that need to be ironed out as distribution ramps up, according to Prashant Yadav, a medical supply chain expert and senior fellow at the Center for Global Development.
“We will have more of these ups and downs until we get to a stable process,” Yadav said.
Given the rocky attempts to get up to speed — and concentration of production at just a few manufacturing sites — the public should expect monthly manufacturing capacity to fluctuate for the time being, he added.
Richard Wilding, a professor of supply chain strategy at Cranfield University in England, noted that there are at least 50 items necessary to run vaccination sites, from alcohol wipes and syringes to personal protective equipment. Supply chains for those items need to run smoothly, too.
Crucially, the delays aren’t just a problem for Europe.
“The price will be paid by developing countries who don’t have access yet, because their deliveries may be delayed further down the line,” Yadav said.
— James Frater, Chris Liakos, Amanda Sealy and Stephanie Halasz contributed reporting.